Civilization (All You Can Eat) at Woolly Mammoth Theatre Company

My guest and I went hog-wild over the lunacy and ferociousness of Jason Grote’s Civilization (All You Can Eat), which is playing at Woolly Mammoth Theatre Company. It was thrilling watching Woolly company members and some of the DC area’s most talented actors – Daniel Escobar, Naomi Jacobson, Sarah Marshall, JaBen Early, Alice Gibson, Tia James, Sean Meehan, Casie Platt, and Jenna Sokolowski – on the stage. 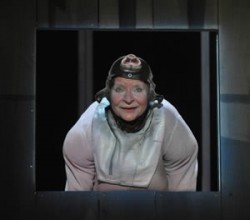 Civilization… takes place in the middle of  the 2008 presidential race between Barack Obama and John McCain, and right before the Wall Street financial crisis had its full destructive impact on the US economy. Grote asks, “What are people willing to give up and/or what compromises are they willing to make to succeed?”

Adding to this powerful experience were ‘interactive’ moments which began as audience members were offered to join in the festivities as they entered the theatre – going ‘snout-to-snout’ with their fellow attendees and the actors, in exchange for something to nibble and drink.

Helen Hayes Award winner Sarah Marshall steals the show as the ferocious and unrelenting Big Hog who is wrapped up in creating a plan to escape. Dressed in a padded suit by Costume Designer Valerie St. Pierre Smith, complete with snout, Marshall commands the stage, walks on her hands and knees, and her eyes ooze with fierce determination to get the hell out of there. Big Hog’s not a happy ham, but you have to admire his fortitude and grit, and you root for this ‘underhog’ to succeed. 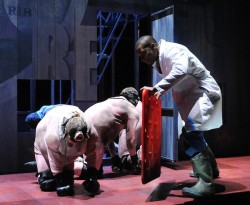 As for the other characters – Casie Platt is terrific as Jade who leave her retail job to find a better-paying career making porn. There’s the frustrated David (Daniel Escobar) – a Latino actor who is making a Twix commercial which he feels is full of racism, but chooses to overlook it because it pays well. Mike (an anxious Sean Meehan), who leaves his academic position, is confident that he can succeed as a consultant when he incorporates the same theories he taught his math students – into his new career. And then there’s manic Jenna Sokolowski (Karen), who is an off-the-wall aspiring actress. Tia James (Zoe, Mike’s wife), directs the infamous Twix commercial, and has some well-earned laughs. But James also provides the most heart-breaking moment scene of the show, when she talks about one of her troubled pregnancies. Alice Gibson plays George Washington in the Twix commercial, and JaBenn Early plays the Veterinarian.

Scenic Designer Daniel Ettinger keeps the set rather simple as we see the outside wall of the barn, until the final ‘symbolic’ scene. The set is changed by the actors with beautiful choreography provided by Diane Coburn Bruning. Colin K. Bills and Veronika Vorel provide the excellent lighting and sound design. Aaron Fisher created the visually stunning video design. 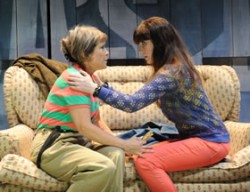 Director Howard Shalwitz not only succeeds in receiving outstanding performances from every member of his hard-working cast, but also ties all the subplots and themes together. He shows the parallels between the characters in the play and the theatre goers who agree to participate in the games. And because food appears throughout the production, you are left asking, “How far will a theatre goer go to get a free drink or snack?”

Civilization (All You Can Eat) is daring, biting, and thought-provoking theatre. It gives you plenty to chew on, and you’ll never be boar-d.