Mozart’s Così fan tutte is a delicate work, finely balancing a cynical and psychologically disturbing libretto with some of the composer’s most lyrical and beguiling music. Yet Jonathan Miller’s misguided and gimmicky modern-dress production at the Washington National Opera forsakes complexity in favor of a kind of smug cleverness, offering a sniggering and sardonic take on the opera with little finesse or genuine insight. 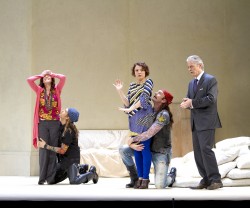 Miller, personally overseeing the restaging of his 1995 Royal Opera production, has reset the action to take place “yesterday afternoon in Washington, D.C.”  The Ferrarese sisters are now from Georgetown, the two “Albanians” from exotic Baltimore. Starbucks and iPhones litter the stage. A large standing mirror dominates the minimalist set, offering comment on the characters’ vacuous self-obsession. Miller observes in his director’s note that Così is his only modernized Mozart, yet the director has failed to modernize fully his own production, which often feels stuck in a late twentieth-century time warp. Disguised as 1970s-style heavy metal bikers, the two soldiers serenade the sisters with “Lucy in the Sky with Diamonds” (at least in the supertitles). Guglielmo and Dorabella dance “the Twist” (c. 1960) before their seduction scene. And memo to Dr. Miller: Fiordiligi’s “z-snaps” and “talk to the hand” gestures in “Come scoglio” are hopelessly passé.

Mozart and Da Ponte, of course, themselves crucially relied upon and parodied a long history of operatic conventions. Yet Miller’s “modern” equivalents are not nearly as hip or clever as the production thinks they are.  (The production’s amusing supertitles, replete with modern and local references, provide most of the evening’s genuine laughs). For all of Miller’s talk about psychological verity and behavioral realism, the stage business here amounts to little more than a mass of caricatures, clichés, and bad dancing.  In support of its sardonic take on love and fidelity, the production offers silly antics and condescending satire played for knowing sniggers rather than probing for genuine psychological insight. Just one example: Guglielmo and Dorabella’s duet, “Il core vi dono,” becomes dominated by crude sexual humor, robbing the seduction scene of the delicate balance between the graceful sensuousness of the music and the erotically charged yet gently flirtatious action.

The young romantic couples do deserve a measure of condescension – they are, after all, shallow, impulsive, and capricious. Yet to stage an unhappy ending – itself now a cliché of modern productions – as merely the just desserts of the characters (“everyone is guilty of treachery,” Miller observes) is to miss an opportunity for greater irony.

The ensemble values, so crucial to a production of Così, are often let down by a cast of uneven quality – vocally and dramatically. Elizabeth Futral’s role debut as Fiordiligi cannot be called a success: her shrill and often labored soprano is not yet up to the technical and emotional challenges of her two big arias and throws off some ensemble balances. Renata Pokupić is a somewhat edgy and coquettish Dorabella, and Christine Brandes is a bright-voiced Despina who, alas, lacks a comic touch.

The men in the cast fare better. Joel Prieto is a sweet-voiced if under-characterized Ferrando, and Teddy Tahu Rhodes a weightier, darker-voiced yet unstylish Guglielmo. The saving grace of the cast is William Shimell, whose wry, sophisticated Don Alfonso, full of worldly cynicism and dramatic bite, offers the most probing insights into Da Ponte’s libretto. 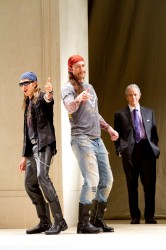 From the pit, Philippe Auguin leads his forces with a sure hand, challenging the ensemble with fast tempos in each of the act finales yet otherwise generally enforcing more measured – sometimes too measured – tempos. Auguin’s reading would gain from greater transparency and a lighter touch in the orchestral textures and a more harmonious blend of voices in the ensembles.