Forget the stars. This guy is a perfect 10!

For anybody who was not at Strathmore last night to hear Gold Medal winner of the XIV International Tchaikovsky Piano Competition Daniil Trifonov perform Tchaikovsky’s Piano Concerto No.1 with National Philharmonic, read this review later. Right now, just trust me. Call your friends and family and get there today. 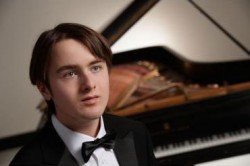 Daniil Trifonov is simply amazing. He’s going to be huge. I saw people crying with joy while he was playing. At intermission, I heard teenagers begging their parents to allow them to go back today with their friends to hear him again. I walked up the stairs alongside a group of three couples who were saying they had never heard anybody anywhere play Tchaikovsky like Trifonov, and still others were saying that he is a genius whose playing is nothing short of miraculous. And then there was the gentleman who stated that he had heard that some orchestras have been struggling to fill seats at their concerts, but that it was pretty clear to him that all they need to do is program Tchaikovsky and book musicians like Trifonov to perform it.

Perhaps my favorite comment of the night came shortly after 10pm, as I was getting into my car in the garage across the street from Strathmore. A little boy who appeared to be about six or seven years old walked by holding his mother’s hand. He asked, “Mom, can I stay up late to practice tonight?  I’d really like to get good enough to play that song.”

Daniil Trifonov is 21 years old.  His fingers literally fly up and down the keyboard at such speed that it seems as if he will not be able to hang on to the end of a phrase, but over and over he proves that he can and that he will. Instead of resting in single note passages or when the tempo slows, he impresses with precision and dynamic interpretation that is simply awe inspiring. There are times when the performance of performing ends, and in these times it is fascinating to watch Trifonov submit to what is happening as he almost melts right into the piano and becomes one with it. His technique is flawless, and his youthful energy and enthusiasm is so contagious that it is visible throughout the orchestra, and all over the face of Maestro Gajewski, who is clearly pleased and enjoying every second of what can only be called an experience of a lifetime. Let us hope that our new found friend is booked again and often.

From beginning to end, Gajewski led his orchestra in an all Tchaikovsky concert that was very wonderfully conceived and well paced.  The concert opened with the sounds of trumpets heralding the much loved and familiar “Polonaise” from the opera  Eugene Onegin. The house was full and enthusiastic. Thanks to the All Kids, All Free tickets that encourage kids age 7 through 17 to attend National Philharmonic concerts at no charge, there are always children in the National Philharmonic audience, but last night they numbered even higher than usual. 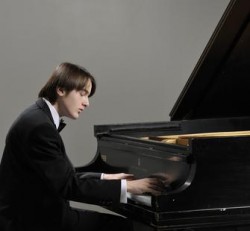 Following the performance by Daniil Trifonov and a short intermission, the program continued with a beautiful performance of Romeo and Juliet, Fantasy-Overture. The audience was clearly in love at this point. It was not by chance that Gajewski programmed an all Tchaikovsky concert. He knew what the mood would be once Trifonov played, and being aware that no composer does more to push the envelope of emotion and love than Tchaikovsky, he made some very good programming choices.

The evening ended with a rousing rendition of the 1812 Solemn Overture, complete with true to life sounds of cannons involved. America loves this celebratory work, and again, what a perfect choice to close out the concert in style. After all, who would ever have imagined that not all so long ago, Gajewski and a close group of friends were collecting $100 from people all over Montgomery County so that they could form the orchestra that last night performed in the Music Center at Strathmore with guest artist Daniil Trifonov, the Gold Medal Winner of the XIV International Tchaikovsky Piano Competition joining the wonderful orchestra that is now National Philharmonic. Only in America.

Next up at National Philharmonic: