Devil Boys From Beyond at Landless Theatre Company

Something strange and exciting has landed in DC! Landless Theatre Company’s DC premiere of Devil Boys From Beyond by Buddy Thomas and Kenneth Elliot is absolutely out of this world. The raucous, foul-mouthed comedy is a delightful romp through a backwater Florida town visited by aliens. Two fiery femme fatale reporters go head-to-head to report on the story of the century and have to deal with the strange locals. The comedic all-male show is directed by Heather Bagnall Scheeler, whose ironic mismatched height casting is sure to provide endless laughter for audiences. 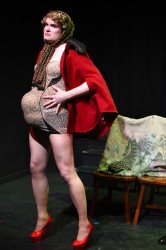 Reporter Mattie Van Buren (Patrick M. Doneghy worked his ‘natural’ advantages like he’d been born to them and easily stole the show) is sent to Florida by her editor, Gilbert Wiatt (Chris Gillespie played a predictably thorny, yet soft hearted newspaper man) and must travel with photographer ex-lover Gregory Graham (a humorously short and self-deprecating Stephen Hock). Fellow reporter Lucinda Marsh (a comically sharp tongued Lucrezia Blozia revealed far more than expected) follows the news team with a plan of her own.

Florida locals Dottie Primrose (an acid tongued Charles Boyington) and Florence Wexler (Steve Kirkpatrick channels the Golden Girl gone bad) have a secret of their own to hide. Audiences can expect non stop laughs from their cross dressing antics and won’t know who to root for! Hunky aliens Gort (David Benji Weiner’s adorably meek persona was endearing, but a little bland) and Tattoo (Darius T. Epps’s comical facial expressions and complete lack of self consciousness are a blast to watch) shocked and awed the audience with revealing surprises. 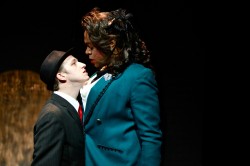 Costume Designer Steve Custer nails The Invasion of the Body Snatchers era wardrobe with skill and sarcastic tact, though a few of the outfits left little to the imagination. Sound Designer Amanda Williams and Lighting Designer Chris Holland wrap the show in a perfect package of space-age sound effects and terrifying lights from outer space.

While the show is quite a hoot, theater-goers beware the incredibly vulgar language and a laundry list of kinky, yet clever word play. Anybody looking for an entertaining evening, something new to see or an opportunity to brag about seeing DC’s hottest play should make it a priority to see Devil Boys From Beyond.

Running Time: One hour and 30 minutes, without an intermission.