Electile Dysfunction: The Kinsey Sicks For President! at Theater J

As the campaign to choose (or re-elect) our next President is in full force, the dragapella quartet The Kinsey Sicks are bringing their irreverent brand of humor and tight harmonies back to Theater J with Electile Dysfunction: The Kinsey Sicks For President! 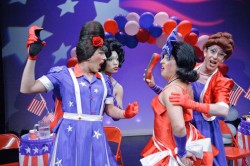 Decked out in their patriotic red, white, and blue costumes and signature big hair – we join The Kinsey Sicks where they have taken over Mitt Romney’s campaign rally.

We have Trampolina (Spencer Brown) who is just trying to keep her virginity and stay pure. However giving the understudy  lots of viagara it gets harder and harder. Winnie (Irwin Keller) is the den mother who tries to keep everything on track even when some dark secret is revealed about her past. Trixie (Jeff Menabat) is the sultry soprano of the group and for some might be the most attractive of the four guys or women or… well you get the idea. Lastly, we have Rachel (Ben Schatz) who does not care what she says and can place a bag of cheez doodles in places you would never dream of. 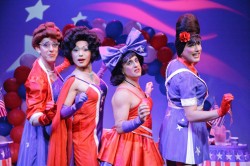 The group’s signature tight harmonies are evident in little ditties like “Vote for Me,(I’m Not From Kenya) and my personal favorite “We Arm The World We Harm The Children,” which is sung to the tune of “We Are The World.” That song is complete with jabs at Bob Dylan’s almost incomprehensible solo from the original.

The Kinsey Sicks’ political satire includes their attempt at getting closer to their supporters. This means prepared questions from the audience and Rachel’s unique schmoozing with an audience member as well, and other jabs that I shouldn’t put in print on this family-friendly website. 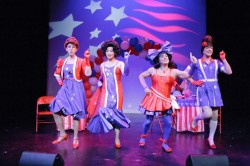 The production elements are as cheesy and funny as you’d expect for a political convention and for a Kinsey Sicks show. Scenic Design Consultant Lauren Helpern has created an environment that includes the standard red, white, and blue balloon towers and lots of patriotic tinsel. It makes you proud to be an American. Lighting Designer Jason Arnold’s special effects include spinning stars and nice silhouette effects for some of the song’s buttons. Sound Engineer Jay Chiang mixes the show with great panache without it getting overly grating to listen to. This is a great accomplishment for this kind of a show.

If you are a fan of dragapella – take a trip to Theater J and check out Electile Dysfunction: The Kinsey Sicks for President! and you’ll really learn how hard it is being a Republican. 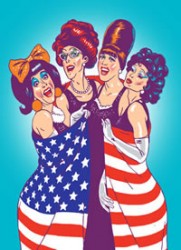