Ellington: A Sacred Concert at The Music Center at Strathmore

On Sunday, February 19, 2012, The Music Center at Strathmore presented the final concert in its three week long Discovering Ellington Festival. I cannot imagine a more fitting tribute to Edward Kennedy Ellington, considered by many to be the greatest jazz musician who has ever lived, than this festival. Thank you, Strathmore, for this wonderful gift.

Ellington: A Sacred Concert was one extraordinary concert. Throughout the afternoon, with refreshingly youthful energy and spirit, the Morgan State University Choir, directed by Eric Conway, 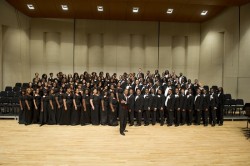 filled the concert hall with a glorious vocal sound that was perfect for this sacred celebration. Their performance in “Hallelujah” and “It’s Freedom” were particularly inspired.

On the instrumental side, barring the return of Duke Ellington and the incredible musicians of his own orchestra, I cannot fathom a better group of musicians performing this concert than the Smithsonian Jazz Masterworks Orchestra, directed by David Baker. A national treasure, their talent runs deep and wide, and their command of the many styles of music broadly classified as jazz is impressive. I love them. Featured guest artists for this concert included Allan Harris and Kehembe Eichelberger on vocals and the return of the fast tapping Manzari Brothers, who also performed in an earlier festival concert alongside the one and only Brian Stokes Mitchell.

While Harris struggled at times with an apparent unfamiliarity with lyrics, an issue that was compounded by his hesitancy to put on his glasses so that he could read his music, his silky smooth voice and easy going style was very engaging and pleasant. From “Something ‘bout Believing” to the big band swing tune “Ain’t But the One” Harris demonstrated a genuine rapport with his appreciative and supportive audience.

I thoroughly enjoyed Kehembe Eichelberger and remain highly intrigued by her. I love opera, and I love jazz, but I have never heard anybody vocally combine the two genres so successfully. Eichelberger’s performance was hauntingly beautiful, with a clear and spinning vocal tone that seemed to simply glide on the wings of her wonderful jazz phrasing.  I especially enjoyed her on “Is God a Three-Letter Word for Love?” and “Come Sunday.” 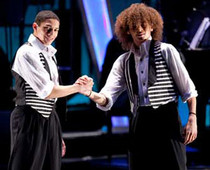 The Manzari Brothers brought down the house tapping to “David Danced Before the Lord.” The entire audience was on its feet in a standing ovation just half-way through the song. I absolutely know that had Ellington had the opportunity to see these two in action, he would have immediately invited them to join him on tour. He would have loved their talent and he would have loved their own very obvious joy in sharing it.

The concert ended with a rousing performance of “Praise God and Dance” which featured the stunning soprano voice of Morgan State soprano Dimery Mowery, singing above her choir and the swinging sound of the Smithsonian Jazz Masterworks Orchestra.

Edward Kennedy Ellington was my friend and my hero. I met him at a master class in the early seventies and sang in a five concert series of his music that concluded with his Sacred Concert. Later, I had the opportunity to audition for Ellington and to sing on the road with the musicians in his amazing orchestra. I was privileged to spend many special hours with Ellington during the last years of his life. Acutely aware of his failing health, he was, at this time, very focused on three things, these being a quest to understand God and to communicate his understanding through his music, a drive to compose, and a desire to help aspiring young musicians.

Ellington died on May 24, 1974. I never stopped singing his music, but I just couldn’t make myself sit through a concert or a lecture without him, without Paul Gonzalves, without Cootie Williams, without Johnny Coles, without Tyree Glenn, and without Mercer. I waited a very long time for this concert Ellington: A Sacred Concert … thirty-eight years to be precise. I will remember it and cherish it forever.