Laughter on the 23rd Floor at The Arlington Players

The Arlington Players present Laughter on the 23rd Floor, a play by Neil Simon about a team of comedy writers for a popular weekly variety show in 1953, who must deal with budget cuts, censorship, and rising McCarthyism. Ian Grossman directs this outlandish and, at times, shocking production.

The cast of 'Laughter on the 23rd Floor.' Photo by Peter Hill.

Set Designer Dave Means creates the office of The Max Prince Show, using a casual conference table with several mismatched chairs and a faded couch. The vibe is a mixture of comfort and business, displaying a bulletin board on one wall, and a dartboard on another. Small details such as lamps, potted plants, and trophies round out the lived-in, semi-professional atmosphere that effortlessly screams, “writers work here.” Sound Designer Chris Kagy provides telephone and music cues, and lighting by Meghann Peterlin helps to separate space and time, dimming when the narrator takes a “time out” to address the audience. The costumes, designed by McKenna Kelly, revert back to 1950’s business casual, with crisp suits for the men, and belted dresses, white gloves, and winged eyeglasses for the women. One character is used as an exception to this standard, whose outrageous outfits range from jaunty berets to bullfighter capes.

It’s another workday, and newly staffed Lucas Brickman (Adam Schiffer) voices his nervousness to the audience, saying he wishes to “find a voice for my humor” on The Max Prince Show. Shy and quiet, Lucas observes as the rest of the writing team spills into the office, each one just a bit crazier than the last. Lucas is first joined by Milt Fields (Jack Sossman), an eccentric dresser who delivers the majority of the many quippy one-liners. Head writer Val Slotsky (James Walsh), a Russian transport, wittily banters with Milt about their differing cultures and his mispronunciation of English words. Walsh shows great talent in delivering a dead-on Russian accent. Hollywood hopeful Brain Doyle (Robert King) has a slight creepiness about him, with narrowed eyes and a slanted grin that becomes even more ominous when his archenemy Ira Stone (Steven Rosenthal) enters the room. Rosenthal is hilarious as Ira – a loud, attention-seeking hypochondriac who irritates more than he helps. Politically minded Carol Wyman (Jenny Rauch) and logical Kenny Franks (Hans Dettmar) balance out the staff as the only seemingly sane characters. Laura Fontaine, (as ditzy but ambitious Helen) adds quite a few comic moments to the show.

Jack Stein (Max Prince) and the cast of 'Laughter on the 23rd Floor.'

However, no other staff member’s antics hold a candle to those of Max Prince (Jack Stein), a paranoid, temperamental comedian who has a penchant for using Tiffany frames to proudly border holes that he punches into the walls. Flouted by his staff as a troubled comedic genius (“We write comedy—Max DOES comedy”), those around him must learn how to deal with his outrageous behavior, which only gets crazier as the network begins to hamper their creativity with budget cuts, time cutbacks, and censorship. A furious Max cooks up strategies that he hopes will liberate them, but the problem is that each one of his plans are as outlandish and bizarre as he is. With a show that they have less control over by the day, and a boss that is one good tantrum away from a padded room, the unique staff must fight to keep their dignity— and their jobs. 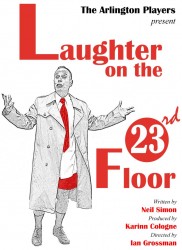 Laughter on the 23rd Floor yields plenty of laughter, but the kids will need to stay at home, as the language is very “adult.” Being a member of a few writing groups, I can say that the portrayal of a typical creative team was very accurate, which I appreciated with a chuckle as I heard the row of women behind me gasp at every other word. Perhaps the thing about this show that I was most impressed with was the fact that all of the actors spoke loudly, clearly, and eloquently, which is a rarity for an ensemble.

All in all, it’s a great time, a terrific cast, and a production that creative minds will especially enjoy.

Laughter on the 23rd Floor plays through February 17, 2012, at Gunston Arts Center’s Theater One – 2700 South Lang Street, in Arlington. Purchase tickets online, or at the venue 30 minutes prior to the performance.