Theatre Kibbitz: Renee Calarco on ‘The Religion Thing’ and Working with Brother Joe

It’s the ‘interview that almost got away.’ During the run of The Religion Thing at Theater J, in DC, which closed on January 29th, I asked Renee Calarco to talk about writing the play and working with her brother Joe, who directed the show.

Joel: How did you get involved in the Theater J production?

Renee: I’d been working on this play for several years; it had actually been scheduled to go into production at Charter Theater in 2009-2010.  Sadly—and as we all know–the economy really took 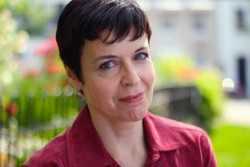 a toll on a lot of arts organizations. Charter was no exception and had to cancel its season. During that summer in 2010, I sent the play along to Theater J because I thought it might be a good artistic fit. Literary manager Shirley Serotsky liked the play and the theater agreed to help me further develop it. We had a reading at Theater J’s “Tea at Two” reading series, in addition to other in-house readings. Ari Roth and Shirley—and indeed the entire Theater J staff—took a risk in putting the play into the season, something for which I am eternally grateful.

What is The Religion Thing about?

It’s about so many things: the compromises that couples make when agreeing to stay together (or not); the struggle to balance a life of the mind with a life of religious faith; and the yearning to find authentic faith.  It’s also about obsessions and addictions and sex.

How long did it take you to write The Religion Thing?

Well, this started out as a 10-minute play, which I wrote in 2004. I expanded it to a full-length in 2005, and it’s been through major revisions since then. At one point, I had two different Act Twos sitting on my computer. I put it aside for a bit, then came back to it over the years.

What character in the play reminds you the most of yourself and why?

On any given day, I change my mind about this! I see myself in Patti’s longing to both find and lose herself in her faith. I know all too well Brian’s bitterness at Christmastime, and I know exactly what Mo means when she talks about striving to create perfection and beauty in her life. Jeff’s determination to change himself resonates with me. And I think that everyone has an inner Glick, whether they admit it or not.

Are you religious and how are your religious beliefs and feelings about religion reflected in the play?

I describe myself as being a moderately observant and somewhat conflicted Jew.  In the play, Brian’s grandfather says, “You can’t be a Jew like you wear a sweater. Too cold, put it on. Too hot, take it off.” Honestly, I think I’ve spent a lot of time taking off and putting on that metaphorical sweater. On the other hand, I’m convinced that organized religion is the root of all strife and violence in the world.

Have you worked with your brother Joe before, and if ‘yes,’ what was the first project worked together on, and how has your working relationship evolved since your first joint project? 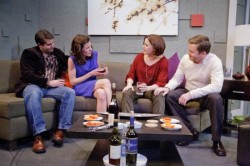 We first worked together on Short Order Stories, produced by Charter Theater in 2006. I loved working with Joe on that production, and I wish that I’d spent more time in rehearsals. I was working an almost- full-time job and a part-time job on top of that, so my time was splintered quite a bit. Before we began rehearsals for The Religion Thing, I organized my work schedule around the rehearsals, which meant I was in rehearsals almost every day. I loved being in that room with everyone, and it helped that Joe and I could actually confer in person…rather than us calling each other when I was at work or at odd hours!  I think that our working relationship has evolved in that I’m definitely more present—physically and mentally.

Both of you and your brother Joe have written plays. Do you help each other when you are each writing plays, and ask advice and/or make suggestions for each other?  Do you attend each other’s rehearsals and ‘opening nights’?

We are always reading each others’ work, asking questions about it, and offering each other encouragement. Joe’s most common advice to me—particularly when I’m whining about making no progress—is “just push through it.” This advice always works for me, and it got me through the last few days of revisions and previews of The Religion Thing.

I try to get to as many of Joe’s opening nights and previews as I can.

When did you both get ‘the theatre bug?’ Was there a love for the theatre in your household?

Our family just loves theatre and the performing arts in general. It goes back a couple generations: our maternal grandfather was a playwright, director and songwriter; our maternal grandmother performed and sang in local theatre; in the 1950’s, our mom sang jazz in clubs around town. Everyone pursued their passions while supporting themselves with other work; I don’t think anyone ever pursued theatre professionally. And now more recently, our brother Dave sings in a band, and his young daughter is absolutely smitten with dance. Our cousin Gina is a recent theatre grad and is just starting her professional career in New York. We were extraordinarily lucky growing up in a family that worships the performing arts. Our dad is 82 and is still going out to see plays and hear music. Plus, he has musical crushes on both Leontyne Price and Adele, which is just the greatest thing ever. 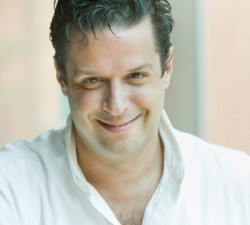 Joe began as a singer and dancer—he’s amazingly talented at both—and I have no singing or dancing ability whatsoever. Though there have been several times when I’ve seen or read something Joe’s written and thought: “I wish I wrote that!” Walter Cronkite is Dead is a perfect example. There’s an absolutely stunning monologue in it about a woman being visited in her dreams by members of the Kennedy family. Really, I wish I’d written that entire play. It’s beautiful and haunting and hilarious and everyone should produce it.

Where did you get your theatre/playwright training?

I started out as a theatre major at SUNY Binghamton, and rather quickly switched to English, thus sealing my fate as being unemployable upon graduation. The most extended acting and playwriting training I got was through doing years and years of comedy improv. I still say it’s the best theatre training that anyone could ask for.  When you’re improvising successfully, you’re living authentically moment-to-moment onstage. If you’re thinking ahead and striving to be clever, it’s pretty much guaranteed that the scene you’re in will crash and burn.  So you learn to act and react honestly in the moment. I did take some formal acting classes around town and I realized that a lot of what I was learning I already knew as an improviser. Improv’s also invaluable as playwriting training, because it teaches you to generate lots of ideas and to let go of material that’s not really working so well. It taught me that it’s possible to power through writer’s block. (The work might be crap, but at least the writing is out there and on the page. Editing can come later.)

What was the first time you saw one of Joe’s productions and said, “She/he is really good!”

I’ll never forget it: Joe was 19 and had directed a community theater production of Godspell in our hometown, Rochester, NY.  The show began the moment you entered the theatre. He’d set the play on a New York subway platform, so some of the cast was already onstage, waiting for a train. I seem to remember some great sound design—you’d hear the sound of trains passing through and just general subway sounds. By the time the show started, most of the cast was onstage still waiting for a train—and then the actor playing John the Baptist entered, singing “Prepare Ye.” I saw that and thought, “Wow. He’s really good.”

An interesting tidbit about that production: Shirley Serotsky was in it!

What was the most challenging and rewarding experiences working with that wonderful cast in the Theater J production?

This production was a joy from start to finish. The biggest challenges I had, actually, were in doing revisions and refinements and cuts—I’m generally not a very fast writer, so I was pushed to just plow though and have changes ready for the cast by the next rehearsal. The cast is just phenomenal, especially given that I was writing changes almost daily, near the end.

Now that we’re in production, I’m having withdrawal! I miss everyone at the theatre so much.

What’s next for you after The Religion Thing?

I’m going back to a play that I started a couple of years ago and developed with First Draft. (It’s a weird little comedy about Alzheimer’s.) And I’m just starting some research for another piece that’s still so new, I’m hesitant to say more, except that it’s about religion (again!) and swindling.

What do you want audiences to take with them when they leave Theater J after seeing The Religion Thing? 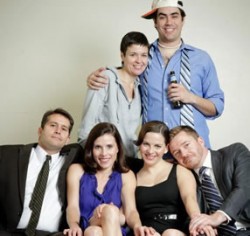 There’s been a lot of feedback and people have very strong opinions about the play, which I love. My goal for this play was to have people talk about it on the way home. As far as I know, that’s what’s happening! What I really want people to take with them, though, is that this play is a work of fiction—it’s not a documentary, it’s not a prescription for what interfaith couples should or should not do in their private lives, and it’s not a theatrical depiction of my political views. I have absolutely no agenda, other than to tell a compelling story about some very flawed, very complicated characters—in the best way I know how.