Theatre Kibbitz: Tasty Monster Productions Presents ‘Personals – A Love Story for the Rest of Us’ 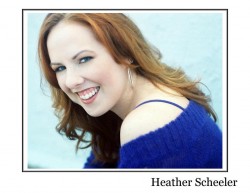 When Heather Bagnall Scheeler and Luke Tudball first met at a rehearsal in August they had no idea that their meeting would result in the newest arts organization in DC  – but what a difference a few months can make. Six months ago, Heather was out to sea, literally, on her second contract with Disney Cruiseline and Luke had just relocated to the Washington DC area not long before, via New York, Memphis, the Outer Banks, and England, his home. Following a very successful collaboration on the Hope Operas, an arts event for the benefit of charitable organizations, Heather and Luke struck up a friendship and discovered a common passion for the arts…and each other.

Luke had been looking for an opportunity to have a greater impact on the DC theatre scene and bring to its audiences lesser known shows and musicals, but hadn’t found the right combination of resources. Heather, having spent the better part of two decades working in the arts, as not only performer but also as educator, agent, administrator and advocate made for just the right combination of skill sets. Add to that their shared interest in unconventional works and jambalaya, and Tasty Monster Productions was born. 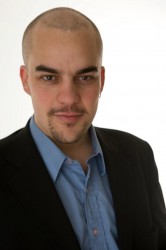 Mr. Tudball says, “We barely discussed it, it seemed such a natural fit. We knew immediately our mission to produce small cast original and re-envisioned works with a long-term goal to add an educational element to our theatrical endeavors. We literally made the decision to start our company and within less than two weeks, we were pursuing licensing rights for our first show.”

Luke had seen Personals in London’s West End and immediately he made the connection. Written by David Crane, Seth Friedman and Marta Kauffman – the writers of the hit TV show, Friends – and with music by, amongst others, Stephen Schwartz and Alan Menken, Personals – A Love Story For the Rest of Us is a comedic musical romp through the crazy world of internet dating and personals ads, a journey through the trials, tribulations, and sometime successes of the dating world – a world Luke was all too familiar with and Heather was experiencing for the first time, having herself recently experienced a divorce.

Ms. Bagnal Scheeler explains, “We talked about it and it seemed right-despite the timing-and everything just came together. We enlisted Mike Noonan and the Unified Jazz Ensemble right away. We put out feelers for a venue and Adventure Theatre, with whom both Luke and I have worked in the past, seemed a natural fit. We contacted the actors and started a Kickstarter campaign and we were overwhelmed by the support we received. ”

“I’m chagrinned to admit but this show quickly became very personal to me.  This became a life imitates art experience for us both,” says Heather.

Luke and Heather are embracing their new found roles as producers as well, mounting not only a Kickstarter campaign but a number of dating-themed fundraisers including a collaboration with dating consultant Erika Ettin of A Little Nudge.

So what’s next for Tasty Monster? Still in the works for the company this season, an original cabaret entitled “Coming Home” and an original one-woman show entitled SingleMarriedGirl, an entry in the DC Capital Fringe Festival starring Tasty Monster Co-Founding Artistic Director Heather Bagnall Scheeler. 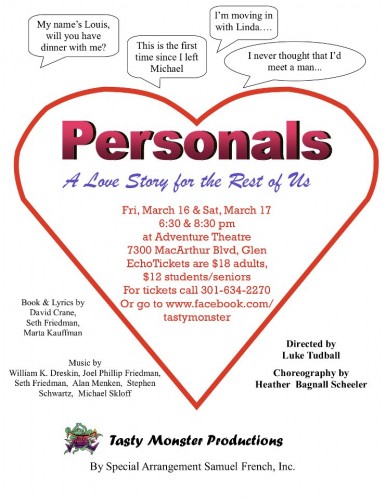