The Arlington Players to Stage ‘A Little Night Music’ at The Mead Center For American Theater at Arena Stage June 1-17, 2012

The Arlington Players  (TAP) announced yesterday that their Spring 2012 production of Stephen Sondheim’s A Little Night Music will be performed in the Arlene and Robert Kogod Cradle at the Mead Center for American Theater at Arena Stage – from June 1-17, 2012. 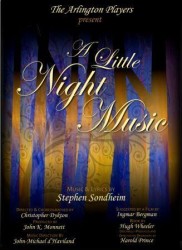 The move to Arena Stage is due to the temporary closing of the Thomas Jefferson Theater in Arlington, which suffered damage from the earthquake that shook the Washington DC area in August 2011. A Little Night Music replaces the production of Cats, which is now postponed to next season, when “The Thomas Jefferson Theater is expected to be once again available for such a large dance musical.”

TAP President Nikki Hoffpauir was beaming, “We are so excited to revisit Stephen Sondheim with A Little Night Music. TAP has a long history of interpreting Mr. Sondheim’s work, and we are delighted that Christopher Dykton and his team will be able to present this piece. The change in venue and looking for a good artistic choice for a different space has proved to be a challenge this year. We are grateful for all the support we have received from Arlington County, Arena Stage’s staff at the Mead Center, and our artistic team as we try to face what nature has given us. We value both our old and new partnerships and friends as we try to stage our spring musical.”

Christopher Dykton, who will be directing and choreographing the TAP production, chimed in, “After having staged Follies in 2009, getting a chance to do Sondheim again with Night Music is a gift. It’s been on my short list of shows to present for many years – I love the score and it’s such a strong book. Life is change and this is very unexpected. I look forward to getting going on this.” Mr. Dykton has previously staged Sondheim for TAP with his productions of Saturday Night and Follies. 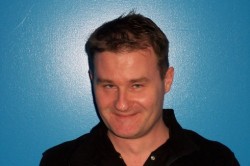 Auditions will be held in March. Mr. Dykton will be casting 14 singing actors (five male, nine female), age ranging 14-70. Singing actors of diverse backgrounds are encouraged to audition. In addition, four to six non-singing/non-speaking actors will be part of the production. More information is here and will appear in our Auditions page when more details become available.

A Little Night Music will be produced by John K. Monnett, with direction and choreography by Christopher Dykton and music direction by John-Michael d’Haviland.