The Language Archive at Forum Theatre

Love is the universal language or so we’ve all been told for as long as we can remember. But perhaps it is communication that makes the universality of love so easily translated. The concept of languages, dead and living, are presented for study in Forum Theatre’s The Language Archive.

Directed by Jessica Burgess, the play is a conversation with the audience – a visit to relationships and language that are thriving and those that are dying. It’s an intimate experience that occasionally breaks the fourth wall to immerse the audience in the necessary words of communication. 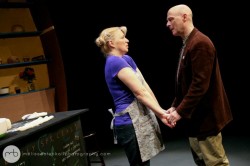 We meet George, a linguist who preserves dying languages. Despite his knowledge of all these languages he cannot communicate with his wife Mary or with his assistant Emma, whose feelings toward George are kept mute in conversation. Add in the comedic characters of an old bickering couple presenting the last of their language – and you have a rollercoaster of up and down moments, heightened hilarity and heart-wrenching sorrow, all coming together in this unique production.

The stage is flanked on either side by an oversized recording reel, almost like bookends enclosing the set. Scenic Designer Robbie Hayes works in conjunction with Lighting Designer Brittany Diliberto to make these recording reels appear to have words, streaming from projectors, printed upon them. This lighting effect spread across the floor of the stage at times making words an ever present concept literalized for the duration of the show. Throughout the performance the audience finds audio stimulation with overlaying soundtracks to significant events.

When George (Mitchell Hébert) first hears Mary (Nanna Ingvarsson) say she’s leaving him, the monologue that ensues is overlaid with a recording of him repeating the words’ take it back, take it back,’ which echo quietly around the room, like a heartbeat, and as his speech frantically increases so does the echo, like a racing heart. Sound Designer Thomas Sowers implements this technique and other effective audio stimulants to enhance the scenes as they pass, like the moment at the train station with the thunderous roar of the passing train that literally shakes the risers of the audience. This show is a treat to the senses – you’ll even smell the fresh baked bread when the Blue Tulips Bakery opens up in the second act.

The actors all communicate with each other on different levels. George has a different language for addressing his wife Mary verses his assistant Emma (Katie Atkinson), and while both these languages are in English they are different – styles of his emotions acting the way dialects do in actual language. The thing that Hébert does best is split his focus between addressing the characters in the show and addressing the audience. There is almost an instructional quality to his voice when he addresses the audience and a more human sense to his interactions with the other characters. 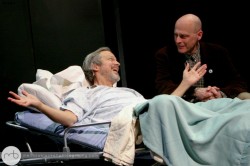 The height of his emotional expression comes when Alta (Kerri Rambow) almost dives over the delicate recording machine to smack at her husband, Resten (Edward Christian). Mitchell Hébert’s eyes fill with panic, and the expressions on his cohort, Emma (Katie Atkinson) are equally as spastic and entertaining. Atkinson embraces her quiet character and has tiny explosions of emotion when in council with her tutor over learning the universal language of Esperanto.

The two most dynamic and compelling characters of the piece come from Alta (Kerri Rambow) and Resten (Edward Christian.) The two actors play an older couple from a far away country with accents that sound heavily Russian – the last two speakers of an almost extinct language. They are explosive, physically beating on each other, emotionally abusing each other in a comic style. Rambow even makes reference to the English language, saying that you can say anything in English because it has no meaning, you can always take mean hateful things back when you say them in English. She delivers this line with such conviction that even as an English speaker, instead of perceiving it as an insult, you believe her. Christian makes a compelling display of the typical bitter old man, his spats with his wife adding the comic ‘highs’ of the show throughout the production. 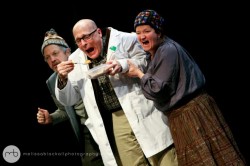 The Language Archive is an intense study in language and communication with all the right laughs and moments to cry and an endearing story to go along with it. So be sure to see The Language Archive at The Forum Theatre before it disappears like so many of the dying languages that fade away.

Running Time: Two hours and 20 minutes, with one intermission.