Tom Jones Made Easy and Zesty

Ambition is in no short supply at Lumina Studio Theatre. Tackling an epic is not only not beyond their sights, but rather standard with this adventurous little theatre in Silver Spring/Takoma Park. In their original adaptation of Henry Fielding’s 18th Century classic novel, Tom Jones, they have taken a massive satirical work of well over 300,000 words, chronicling the life and times of its titular hero from youth to marriage, journeying through every facet of English society, and turned out a play with seventy roles shared among some thirty-five performers.

The play is a grand work indeed, with a constant momentum and a lovely zest for the broad portrayal of 18th Century English society. Adapted by John O’Connor for Lumina, who also plays the role of Partridge, a surgeon, in the later part of the production now playing at Round House Silver Spring, the production is similarly zesty. Lumina shines with their exuberance for this material, and it is made quite accessible and enjoyable a ride – with not a one of the thirty-five letting up their energy.

As the tale unfolds with gusto at every step, this show is practically a recreation of not only the costumed (beautifully by Kelly Newman O’Connor and Joanie Lawson) 18th Century, but the ballad opera form itself, popular at the time and rarely seen these days. With several tricks up its sleeve, from chipper, brief musical numbers stolen from John Gay’s (also classic 18th Century work) The Beggar’s Opera and the creation of the character Fielding himself as a very charming narrator/impresario (Lumina’s Artistic Director, David Minton) to the casting of several different performers to play four of the main characters, growing up together — child to teen to adult – the show appeals constantly despite the enormity and age of its source material.

O’Connor also directed this very family friendly version of the rather bawdy tale of the foundling Tom Jones who grows up in the country house of one Squire Allworthy (Ritchie Porter), virtuous but a bastard with no formal schooling other than that of his two tutors, Mr. Thwackum (Michael Novello), a religious tutor, and Mr. Square (Mark Reiner), a philosophical tutor. Both of these fellows are, of course, satirical buffoons and though clearly they have taught Tom something, they are the worst of models for propriety and wisdom he might have. As he grows, he falls for the virtuous daughter of the other country squire, one Squire Western (Brian Monsell), as loud and jovial a blowhard as one might ever see. Monsell does his best Brian Blessed impression throughout while his daughter, the lovely Sophia (Dre Weeks), is caught between one the affections of Blifil, a well born monster, and the dashing parentless Tom.

However, the story is so much more than that. Things happen fast and furiously, from messy mishaps to naughty escapades, with Tom’s virtue intact outside of his irrepressible impulses to lust, and always in a forgiven or still forgivable state with another lusty woman’s consent. Still in heaps of trouble, farcical and otherwise, he eventually is forced to head out on the road, and after further adventures ends up in London for the climactic resolution where everything turns out comically and all levels of society are sweetly skewered. 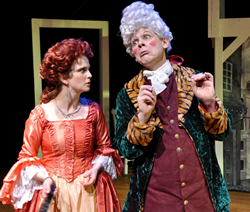 The casting is fine and the highlights of the cast are indeed several of the teens as well as some of the leads. Particularly delightful are Ian Blackwell Rogers, as the adult Tom, so very nobly charging his way through his travails, with utmost charm and curly dark locks flowing; villainous Ian Teixeira and Keith Anderson as the teen and adult Blifils, respectively, both as creepy and envious and snivelly as they come, and great fun to watch. Also a hoot are the double act of the two tutors, with Novello and Reiner made up in perfect cartoony extremity. Shining on the older side of Lumina’s range are the hysterical Wendy Lanxer as Mrs. Waters, a lady in distress, especially in the food as sex scene – the only way, perhaps, to do what much of the play is about in front of young audiences – and John O’Connor himself, with some lovely comic timing as the good but alcoholic doctor Partridge.

Supporting all of this in ballad opera form is a band, the Blackjacks, and oh so many wonderful players charging along through so much gusty plot in various quick gags and sunny songs.

In all, this is a production to be proud of, supporting children and teens in drama, but also a very worthy – even awe-inspiring – adaptation of a major classic. That Tom Jones may be less studied today, or less familiar a name, does not by any means make this show less of a charmer. If you want your teen to experience classics locally in an accessible way, you really could hardly do much better than this.

Tom Jones plays through February 5, 2012, at Lumina Studio Theattre at Round House Theatre Silver Spring – 8641 Colesville Road, in Silver Spring, MD. For tickets, they can be purchased at the door, or online: