The Wings of Ikarus Jackson, a world premiere commissioned by The Kennedy Center, is beautifully produced, engaging, and – there’s no way around it – uplifting. Parallels to the Greek myth of Icarus are slim – no one has to fashion wings to escape imprisonment on an island, and no one crashes. The Ikarus of this story successfully escapes his isolation and comes to a joyful acceptance of his nature.

Adapted by Jerome Hairston from the book Wings, by Christopher Myers, the play is about a boy who has wings, a strange hairstyle, and an unusual way of dressing. On his first day at a new school, he hides the wings in a backpack, but the rest of his get-up inspires a classmate to remark, “The circus is in town.” The lesson is on gravity, and as the teacher speaks of the Wright brothers’ and NASA’s accomplishments, Ikarus’ wings struggle to be free of his backpack, which he wears even at his desk. 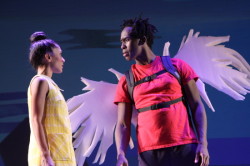 Tugged into odd positions by his hidden wings, Ikarus endures his classmates’ snickers as long as he as he can, then bounds out of the room. Cris, a bookish and uncool outcast, manages to befriend Ikarus. Her struggle is the opposite of his: she feels invisible. When taunting classmates eventually tear off his backpack, revealing his wings, Cris tracks Ikarus down. Alone with her, Ikarus confesses that he has tried to tear his own wings off. Cris helps him to see the beauty in his wings, and together they soar above the city harbor.

Perhaps because I had never seen a play for children at The Kennedy Center, I was impressed by the high quality of the production. A full program for adults was provided, as well as an-eight page program specifically for children, including illustrations and thought-provoking questions. The set, by Meghan Raham – a series of tiered levels and stairs – is enhanced by video projections, showing, for example, what is in Ikarus’ sketch pad; a cityscape sliding backwards as Cris chases Ikarus in a taxi; moving clouds and shimmering water.

The music, composed by R. MacKenzie Lewis, and the sound, designed by Cris Baine, are integral to the unfolding of the story. Lighting Designer Dan Covey uses a restless, dappled light to transport us into Ikarus’ dream world.

Skillfully choreographed by Director/Choreographer Devanand Janki, nearly the entire play is danced, and the action on stage is continual. With feather-light ballet movements, Andreu Honeycutt (Ikarus), a breathtakingly skilled dancer, conveys flight. Other types of dance (hip-hop, Latin, jazz, etc) and mime are used well by all the actors throughout. Felicia Curry is typically compelling, as the bullying classmate Shorty, and Lynette Rathnam does a wonderful job as awkward, nerdy, and earnest Cris.

Though recommended for ages eight and up, my five-year-old followed the story easily and remained engaged throughout. Adults attending the play without children seemed equally rapt.

This first-rate high-flying production of a tale of survival, triumph, and acceptance of difference appeals to all ages – and is well worth seeing.