I met Zurin Villanueva at The Lincoln Theatre three years ago, and instantly realized that she had all the skills to become a big star on the stage. I am very happy to have this opportunity to talk with Zurin again – this time about playing the legendary Josephine Baker in Josephine Tonight – where she is wowing audiences with her great singing, dancing, and acting.

Joel: How did you get involved in Josephine Tonight?

Zurin: I was recommended by André De Shields, when David (musical director) was racking his brain as to who could do this and who was the right age, André told me it was obvious. I had just finished playing Charlaine in Ain’t Misbehavin’ for him. Once I had a meeting with Maurice Hines and he told me in the room that I had the part – I was ecstatic of course. 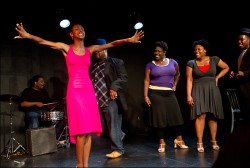 Did you know who Josephine Baker was before you auditioned? And what did you learn about her that surprised you?

I knew that she was one of the most iconic African American entertainers there ever was, and that as an artist she is very important to know. I was surprised to find out that she was a spy for France during WWII. Her bravery and gumption were impressive

How did you prepare for this role?

Since the show focuses on her early life, I sought out as much as I could on her childhood. Once you read Naked at the Feast and The Hungry Heart by her son Jean Claude Blake, and you understand where someone came from – youcan understand how they became who they were – and more importantly – why they did the things they did. Once your find the ‘why’ – you can play anyone accurately.

Take us into your audition. What did you sing?

I actually didn’t sing anything. It was one of those incredibly rare yet amazing moments where your previous auditions and performances gets you your next job. That and André De Shields of course! LOL

Once Maurice said to me that I had the part in the room – I had to try to keep my cool because the meeting was not even over yet. I wanted to turn into a little girl and scream but I called my Mom and danced around for about ten minutes. I had to wait to do it in the hallway. The janitors got quite a show!

What is the best advice Director/Choreographer Maurice Hines has given you about playing Josephine Baker, and what was the hardest thing about learning his choreography for Josephine Tonight?

Maurice didn’t say much to me about playing her. I think he was waiting to see what I would do on my own first. One thing he said to all of us that there is no such thing as too little for him. Bigger is better! I am a classically trained dancer first and because of that I carry myself high with a strong center, so the hardest part for me was changing my center of gravity: you start low, bend my knees, really release and stay there.

How would you describe the score by Sherman Yellen and Wally Harper? What is your favorite song to sing in the show?

It its very classic Broadway which trends to be my natural type of voice. I began singing legit Broadway first so I am very comfortable with that. My favorite song is “Get on With It.” I love it because not only is it fun to sing in my mix – but the words really inspire and push me through whatever may be bothering me physically or spiritually that day, and I’m grateful for that.

You are working with an amazing cast of  ‘veterans’ – Aisha de Haas, James T. Lane, Debra Walton, and James Alexander. What have you learned from them?

Yes, they are amazing! Let me just say that it is nuts how strong, versatile, and fun they are – which is great to have in any show but especially this one – because I’m doing so much constantly moving it wouldn’t work without them. I need all the character support I can get. They give me advice on everything! Whatever my issue is they have an answer for it, and that’s what happens when you have a group of actors who all have been in the businesses way longer than you, and I love to learn from them. 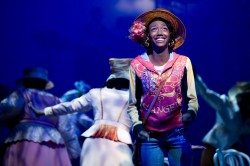 Zurin Villanueva as Yolanda in ‘Crowns’ at Arena Stage at the Lincoln Theatre in March and April 2009, Photo by Scott Suchman.

I spent a day at the Finding Yolanda auditions at The Lincoln Theatre and you were selected to play Yolanda. What have you been doing since the run of Crowns closed? And what are you doing after Josephine Tonight?

It has been three years already! Lots had happened. I went in route with the Kennedy Center in Nobody’s Perfect: The Musical, based on Marlee Matlins children’s book. It was my first tour. I went to Zurich, Switzerland to sing in a real circus for the holiday season. Then most recently I just finished playing Charlaine in Ain’t Misbehavin,’ directed by AndreDeShields at Crossroads Theatre.

You worked at MetroStage before. Why do you enjoy working here?

My very first check on the stage came from MetroStage. I was a sub for Amber Iman who was in The Stephen Schwartz Project, directed by Michael Bobbitt, while she was at her graduation ceremony. I still have a copy of that check. Yes, I kept it!

What do you want audiences to take with them after seeing Josephine Tonight?

I hope they see how much Josephine Baker went through just to get a meal and then look at their own lives, see their problems in comparison, and just get on with it!

Footage of Josephine Baker performing her infamous “Banana Dance” at the Folies Bergère in Paris, France circa 1927.

Watch Wally Harper at the piano and conducting with Barbara Cook singing “In Between Goodbyes,” written by Wally Harper with  lyrics by David Zippel.