‘A Quick 5’ With Christopher Youstra

Christopher Youstra is one of those people you just see everywhere in the DC area. He is the Musical Director of most of the big musicals at Olney Theater Center, and recently completed Pop! for The Studio Theatre and Chicago at Toby’s.  You may see Chris performing onstage – like playing his accordion and hamming it up in Olney Theatre Center’s Joseph and the Amazing Technicolor Dreamcoat. Last year, Chris’ work was also seen and heard at The Kennedy Center, and at American University- where he was the Vocal Adviser for AU’s production of Company. 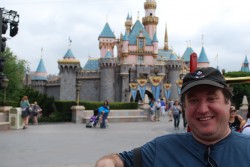 Did you go to school for music?

Eventually, I did. However, I originally went to college to NOT do music – I was going to be IN the shows and get a degree in Psychology (which I did). I felt there was no way for me to make a career in music, especially because I started piano so late, and I just wanted it as a hobby. Halfway through my junior year, I added Music to my degree and decided to go to grad school to ‘catch up.’

In grad school I was in charge of music for the Newman Center at EIU, and I had played for some shows in High School and College. I wanted to be IN them but found out I got paid to play them, so…..

Back home, my first jobs were freelancing at a few churches and working as a piano player for Summer Dinner Theater at Montgomery College. Even then, I had no aspirations of being a music director or conductor.

At Olney Theatre Center you usually have to reduce the band down to 6 or 7 players. How do you decide which instruments you are going to use?

It depends on the show, but I usually like to have a wide variety of colors at my disposal.  If I have a reed tripler/quadrupler, I can tuck her on clarinet with the trumpet and trombone to get a brass choir sound that then can evolve into flute with a violin for a lighter sound. I also like to use a large variety of percussion instruments for different colors and frequencies. 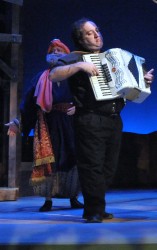 Chris playing the accordion in 'Joseph and the Amazing Technicolor Dreamcoat' at Olney Theatre Center. Photo by Stan Barouh.

Do you prefer playing the classic musicals or the more contemporary ones?

Really no preference – the variety is what keeps my job interesting. In a 4 month period this year, I am playing Chicago, Sound of Music, and Pop! (a new rock musical at Studio) and I am enjoying all three styles of classic, 70s throwback vaudeville, and contemporary. I would say that my favorites are either shows that have a real great rock/contemporary edge to them (Passing Strange is one of my favorites) or that have a terrific choral sound to them (Titanic and Ragtime, for example).

Is there a show you have not musical directed yet that you really want to do?

Absolutely, and some shows that now having done 4-5 times, I am done with!  I have conducted Evita but never music directed it and I think that would be fun. I have never designed Jesus Christ Superstar, Rocky Horror, Into the Woods or  Dirty Rotten Scoundrels and I think those would all be great to sink my teeth into. I also would love to do Parade, Passion, Sunday in the Park  and  Candide, but those all seem less likely right now.