‘A Quick 5’ with Larry Hochman

Larry Hochman is a Tony and Emmy Award-winning Orchestrator and Composer. He shared the Tony Award for Best Orchestration this past year for The Book of Mormon with Stephen Oremus. He was also nominated this year for his outstanding work on The Scottsboro Boys. Larry has also been nominated for Tony Awards for his work on Fiddler on The Roof, A Class Act and Spamalot. He won four  Emmy Awards for the PBS Series The Wonder Pets on Nickelodeon. Larry has scored charts for Audra McDonald, Lauren Kennedy, Hugh Jackman, Chita Rivera and some unknown named Sir Paul McCartney. DC credits include work on The Visit and Giant at Signature Theatre, and Senor Discretion Himself at Arena Stage. 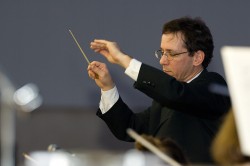 Later this season you will be able to hear his work at Kennedy Center when the tour of The Addams Family comes to town. His film work includes orchestrations for The Informant! composed by Marvin Hamlisch and the TV versions of Annie and Cinderella. Some other theatre credits include I Love You Because, Woman of Will and Late Nite Comic. He is the composer of the musical One Man Band. You can also hear Larry’s work if you are fortunate enough to catch a production by Pushcart Players. He has been their arranger for over 30 years. His daughter Laurie’s musicalization of “The Pledge of Allegiance” was premiered by The Boston Pops as a response to the 9/11 attacks. Larry was kind enough to score an original song that was composed for me and my wife Jennifer at our wedding in 2010. Such a nice and talented guy.

“Professional,” you ask. As in simply getting paid? I assume you don’t really want to hear about Children’s theatre (I mean pre-Pushcart Players, when I was a sophomore in high school, or making $10 with a teenage band) – this could get boring. How about first “real” jobs?  I’d love to mention: summer stock (music director for New London Barn Players, New Hampshire), first NYC gig: subbed in the pit of Pippin (on Broadway, Dec 1974), Music director for Wings (off Bwy in 1975), Music Director for Godspell (bus & truck, 1975), and rehearsal and pit pianist for the original Pacific Overtures (1975), although the keyboard chair didn’t remain on Broadway, I played it for the Boston and Wash DC tryouts. First professional orchestrating were: A Night with Sigmund Romberg, Panama Hattie (w Ann Miller) and Pushcart Players (TV pilot for WCBS).  I guess it did get boring after all.

You have scored charts for artists ranging from Audra McDonald to Paul McCartney. When you are on a job – are you ever in awe of who you are writing for?

Yes. Paul. In awe. Now I love Audra, but when I worked on her 1st album, I didn’t know who she was! She wasn’t famous yet, besides, I don’t keep up very well with who’s who. Here are some people I got a little star-struck by: Mike Nichols, Eric Idle, Stephen Sondheim, Hal Prince , John Kander, David Hyde Pierce, Tim Curry, Sheldon Harnick, Jerry Bock, Marvin Hamlisch, Barry Manilow, Michael Tilson Thomas, Maury Yeston, Susan Stroman, and Jonathan Tunick.

I realize that sounds like I’m totally star-struck by everybody. But here are some people that I know and love but am not star-struck by:

How much collaboration is there between the composer of a musical and the orchestrator?

Every composer is different. Most composers at least have an in-depth meeting at the beginning, and very few discuss details once I start working. But I often get more feedback after they’ve heard it played by the orchestra. I can count on one hand the composers who looked at my scores prior to the orchestra rehearsal. Those few include Andrew Lippa, Bobby Lopez and John Kander. Notwithstanding, that first meeting is the most important, because it affects the broad strokes. Then the smaller details are up to me. Beyond that, it’s interesting to note that I’ll get more input from the music director. Although that’s usually the performing and routining side, not the deep aesthetics. More and more I find that I’m hired because they think I have the answers, so they leave more decisions to me.

Of the orchestrators who came before you – who do you most admire? 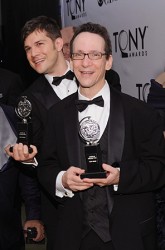 Stephen Oremus and Larry Hochman with their Tony Awards for Best Orchestrations at The 2011 Tony Awards ceremony. Photo by Coppola/Wireimage.com

Ralph Burns, Jonathan Tunick, and Harold Wheeler. Each of them found a new level and connection of what the orchestration can do to convey the song. I respect those in the Robert Russell Bennett era, but they seem more like the meat and potatoes.  Perfect for what they wanted to accomplish, but not the kind of scoring I like to do. But I only mentioned the theatrical orchestrators.  I have to add Jerry Goldsmith, Erich Korngold (among other film greats), and then Ravel, Mahler, Strauss, Wagner, Puccini, Tchaikowsky, and a hundred others.

What do you consider to be your greatest career accomplishment so far?

I can’t narrow it down to one. I’ll name The Wonder Pets, Spamalot, the Ellington arrangements for Audra, The Book of Mormon, Fiddler (revival), and “In Memoriam” for Orchestra. Also, my orchestration of my daughter Laurie’s song “The Pledge of Allegiance.”

Well, that was easy.

Watch Larry Hochman and Stephen Oremus of The Book of Mormon accepting their Tony Award for Best Orchestrations at The 2011 Tony Awards ceremony.

Read: Arranging and Orchestrating the Broadway Musical by Laura Deni.