‘A Quick 5’ With Tonya Beckman Ross

Tonya Beckman Ross is one of DC’s most versatile performers. Whether it’s Mikveh at Theater J or A Wrinkle in Time at Round House or Owl Moon for Taffety Punk – Tonya shows her range of acting skills in every role she plays. It struck me that no matter what she does – she is totally immersed in the character. That’s what makes a great actress!  Tonya is also on the faculty of The Theatre Lab School of Dramatic Arts. 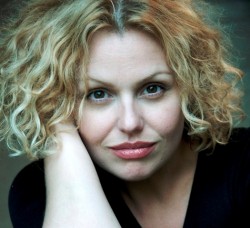 How did you get into acting?

High school drama club. I’d just moved to a new school, and it seemed like a good way to meet people. And I was immediately hooked.

What brought you to the DC theatre community?

I was married to someone at the time who came here for graduate school. The plan was to stay here for the year he was in school, and then we’d head back to Chicago.  But then I started auditioning and working, and by the time the year was up, I didn’t want to leave. That was 7 years ago, the longest I’ve ever lived anywhere.

What are some of your favorite roles?

I just played Beatrice in Much Ado About Nothing which was a longtime dream role of mine. I also really loved playing Sonia in Crime and Punishment at Round House, and Miki in Mikveh at Theater J. Those are just off the top of my head, but honestly, I can’t think of a show I’ve done that hasn’t reminded me at least once why I chose to follow this path. Being able to tell stories for a living is such a privilege.

What do you like about  teaching at The Theatre Lab School of Dramatic Arts, and do you prefer it over acting?

I wouldn’t say that I prefer it, but I do find it very fulfilling. I love working with kids on Shakespeare and watching the lightbulbs go off when they realize that they really do understand it. I love working with early career actors on whatever their specific journeys are.  Whenever I’m teaching, my primary goal is really just to share the love and passion I have for theatre.  That’s what all my favorite teachers had in common – they loved theatre and wanted to share that with me.

Is there a particular role you have not played yet that you are just dying to do?

I don’t really have a list of specific roles.  I’m always attracted to Shakespeare and classical comedies.  I’m always interested in something totally different from the role I just played.  I have two rules about what jobs I take:  first, there have to be people I’m interested in working with, and second, if something about the project scares me a little, I have to say yes.