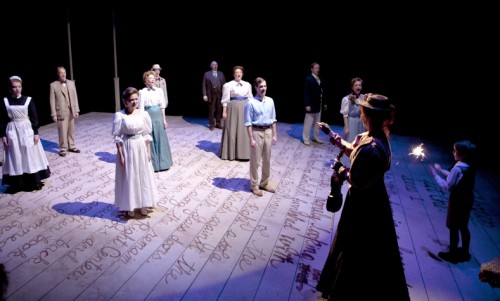 The cast of Arena Stage at the Mead Center for American Theater’s production of Ah, Wilderness!. Photo by Scott Suchman.

Arena Stage kicks off its Eugene O’Neill Festival with a first rate production of O’Neill’s slice of Americana,  Ah, Wilderness. The play which is set in 1906 on the Fourth of July, takes us back to a much simpler time in America. A time when it was ok for kids to play with firecrackers and the whole family got together for dinner and actually talked to one another (who knew). 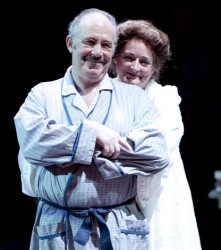 The play centers on the Miller Family. Nat Miller (Rick Foucheux) is the father who owns the local newspaper and his wife Essie (Nancy Robinette) who runs a well kept but lived-in house, in a “bustling, mother-of-a-family way.” The Millers have three sons: Richard (William Patrick Riley) who Essie worries about becoming an anarchist based on the types of books that he reads, Arthur (Davis Chandler Hasty) who is a 19 year old Yale football player, and Tommy (Thomas Langston) an 11 year old who is very inquisitive and loves to set off firecrackers in and outside of their  home.  The Millers have one daughter, Mildred (Talisa Friedman) who is the 15 year old teasing sister.  Sharing the family breakfast this fourth is Nat’s sister, Lily (Kimberly Schraf) and Essie’s brother, Sid (Jonathan Lincoln Fried) who is constantly soused.

What kind of story would this be without the love interest, Muriel McComber (June Schreiner), the girl who Richard Miller will ultimately declare his love to on the beach later in the play.

O’Neill’s work requires a fine group of actors and Arena Stage has hit a home run with its casting.  Under the exquisite direction of Kyle Donnelly, she keeps the play very well-paced and gets the best performances out of these actors. Anytime you have performers like Rick Foucheux, Nancy Robinette and Kimberly Schraf onstage it is like watching a master class in acting. For those of you who have not seen any of these performers work, here is your chance to catch some of the best acting that DC has to offer. The younguns hold their own as well. Fried, Friedman, Hasty, Riley and Schreiner all do a yeoman’s job with their characterizations and Langston whenever he is onstage manages to steal the show. 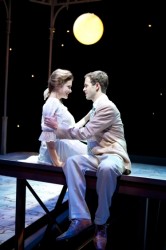 This production has a fine bunch of ensemble members who play the smaller, but no less important roles. The ensemble when paired with the leads blend together to create the world that O’Neill envisioned for his early 20th century portrayal. James Flanagan doubles as Wint Selby who is a classmate of Arthur and also plays the bartender who throws Richard out of his bar after a night of drinking and an encounter with Belle (Pearl Rhein) who is a lady of the evening. There is Muriel’s dad, David McComber (Leo Erickson) who brings to Nat’s attention some of the literature his son has been forcing on his daughter. (McComber also doubles as the Salesman in the bar.) And last, but certainly not least, we have the housemaid, Norah (Allison Leigh Corke) who takes orders from Essie and never complains.

The physical elements match the performances. Kate Edmunds in the round proscenium reminds you of an old turn of the century gazebo. My favorite touch was having the stage floor painted to have the first page of the script to Ah, Wilderness in O’Neill’s own handwriting. Nan Cibula- Jenkins’ period costumes which include the long flowing dresses for the ladies and period suits and knickers for the men help to compliment the period scenery. Michael Roth’s incidental music does what it needs to do without overpowering the action and the cast also performs some period songs which give us even more flavor of the time.

Arena Stage has done a wonderful job with Ah, Wilderness. With its dream cast and great physical production, I urge you to go and take yourself back to a time before all of the modern day distractions we have now.

This is just one of many attractions Arena Stage has in store during this festival.

Running Time: Two hours and 40 minutes including one 15 minute intermission between acts one and two and a five minute pause between acts two and three