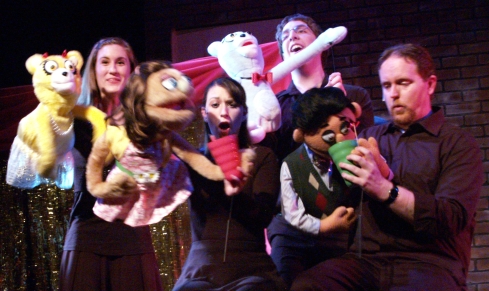 This review is brought to you by the letter “G” for GO!  Go see the Silhouette Stages production of Avenue Q!

Best described as a Saturday Night Live spoof of Sesame Street, Avenue Q addresses the trials and tribulations of entering the ‘real’ adult world after college.  Told through songs, skits, and puppets, this musical is most enjoyed by the 20 to 30 something crowd.

The story centers around Princeton (Ryan Geiger) who has a B.A. in English, but “can’t pay the bills yet” because he has “no skills yet.” Luckily, since moving to Avenue Q, he doesn’t have to grow up alone, for his new neighbors have become new friends. One of those friends is Kate Monster (Danielle Sherry), a kindergarten teaching assistant who dreams about one day having her own school for monsters.  While Kate Monster knows what her dreams are, Rod (Neil Rushnock) and Nicky (Brian Sackett and Clare Kneedbone) haven’t even quite figured out that they are gay.

Co-director, Mo Dutterer says that “Directing a show we have never done before is always an exciting challenge and Avenue Q didn’t disappoint!”  The area premiere of this non-traditional musical is matched by its non-traditional casting, which included casting who appeared to be a caucasian woman as Christmas Eve (who is an Asian American), a caucasian man as Gary Coleman, and an African American woman as Lucy, whose puppet counterpart is white.

The humor of this play is found underneath the characters pessimistic outlook on life.  What made the direction of the comedy aspect so good was that the actors didn’t mug for laughs.  Ryan Geiger as Princeton exemplified this most of all with his pensive renditions of “What Do You Do with a B.A. in English?” and “It Sucks to Be Me.”   Always the dreamer, Kate Monster, played by Danielle Sherry believes that the mix-tape given to her by Princeton is a sign that he likes her.  Danielle’s performance is endearing while her singing voice is enjoyable to listen to.

This musical, with music and lyrics by Robert Lopez and Jeff Marx, is edgy with songs titled “Everyone’s a Little Bit Racist” and “I’m Not Wearing Underwear Today,” included in this sometimes politically incorrect musical that even makes fun of homelessness.

The street facade set, while passable, could have been enhanced with more details.  In addition, the mini paintings on wood which were leaned against the set to represent other scenes wasn’t visually appealing.  In the end, however, the set doesn’t matter as much since most of the eyes were glued to the professional puppets which were rented especially for this production.  The rent on the puppets costs the same as the monthly rent of a NY apartment! 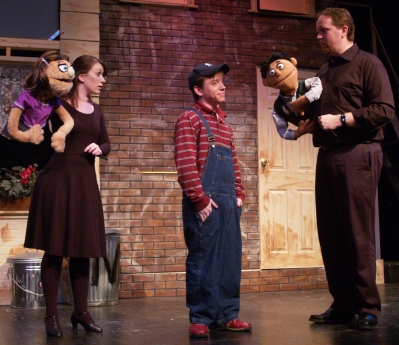 Besides the puppets, there are also three all human characters: Brian (Matt Scheer), Christmas Eve (Jenny Abraham), and Gary Coleman (Matt Wetzel).  Matt Scheer is a regular performer at Silhouette Stages and I am glad because he is always entertaining, all while being a ‘regular’ guy at the same time.  Jenny, playing the part of Brian’s fiancée, is funny as when she says the lines, “People always learning, all through their lives. Look at mama bird. She push baby out of nest and that’s it. If baby bird fly, good for baby. If baby bird fall and crack head on ground and get eaten by a cat, then it need to do better next time.”  I’ve been watching Matt Wetzel for a few years now on stage and he is clearly not shy and is comfortable in his own skin.  Small in stature, but big in pizzazz, he is well-cast as the spunky Gary Coleman who is the building superintendent.

Last, but not least, we have Elizabeth Tane Kanner as the intimidating Mrs. Thistletwat and Jeff Miller and Katrina Janson as the Bad Idea Bears.  The casting for this show was very good, but especially for the Bad Idea Bears!  These two outrageously manipulate Kate and Princeton into ordering some ‘harmless’ Long Island Iced Teas.  What happens next is something you have probably never seen before!

So bring out the “Bad Idea Bear” in you, and come out and enjoy Silhouette Stages production of Avenue Q!  It promises to not be such a bad idea after all!

Warning:  This show contains profanity, puppet nudity, and adult subject matter and is not appropriate for children.