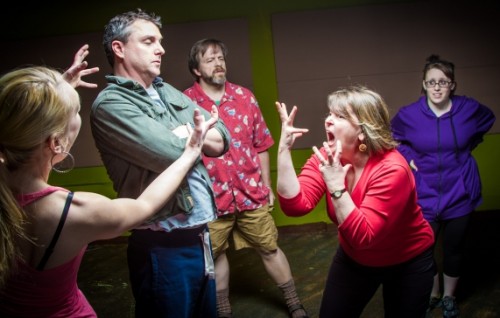 Have you ever wondered what goes on inside actors’ heads? There is a process, certainly, that happens backstage, during warm-ups…and in acting classes. If you want to find out how actors learn to be actors, Circle Mirror Transformation by Annie Baker, currently playing at the Fells Point Corner Theatre, is a good start.

The last is a genuine theatre exercise, and speaks to the authenticity of this play. The action takes place in what looks like every community center classroom you’ve ever seen: the olive drab walls, the ugly speckled brown and beige floor tiles, the small red fire extinguisher, the dirty window in the middle of the door. There is a bright blue exercise ball, a hula hoop, a chalk board that admonishes against smoking, and a bulletin board plastered with flyers. Set designer Roy Steinman perfectly captures the bland, unassuming and dirty all-purpose room where many community center acting classes take place.

This is a play where actors are on stage playing acting students, so it’s no surprise that there’s an element of metatheatre. Most striking are the four full-length mirrors on the back wall. Every action is reflected in those mirrors cast against the background of the theatre audience staring in rapt attention at the stage. The acting students periodically perform monologues in the character of their fellow students, which can be initially confusing, but ultimately reveals a lot about the characters. 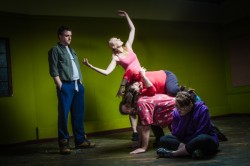 The cast of 'Circle Mirror Transformation.' Photo by Ken Stanek.

Playwright Annie Baker, according to the program, is a big believer in actively using silence to forward the action of the play, and it is to the actors’ credit that the show never seems to lag despite long periods of quiet. Lynda McClary as Marty perfectly captures that coaxing vibrato that is a hallmark of hippie fine arts teachers. Her efforts to maintain control of the group while maintaining the appearance of a free spirit are fascinating to watch. Among the students, Zarah Rautell’s performance as Theresa is brilliant; every movement is big, bold and enthusiastic, exactly the kind of body language an invested theatre student needs. She contorts into a large tree, becomes Marty’s angry, aggressive mother, and successfully propels a hula hoop around her gyrating hips.

If I had one problem with this production, it was the scene changes. The scenes were brief, so the changes were frequent, and every one apparently necessitated a blackout. This left the audience staring at a dark stage almost as often as they were looking at a brightly lit one. If the light cues had been reduced to each time the week changed in the play it would have had a much better flow.

Despite the frequent scene changes, Circle Mirror Transformation is definitely worth seeing. It’s full of wry humor, contains an unblinking look at human nature and experience, and has some fantastic physical comedy.

Running Time: 110 minutes with no intermission.

Circle Mirror Transformation is currently playing through April 8 at the Fells Point Corner Theatre, 251 South Ann Street, Baltimore, MD. For tickets, call the box office at 410-276-7837 or purchase them online.