‘Lend Me a Tenor’ at Heritage Players 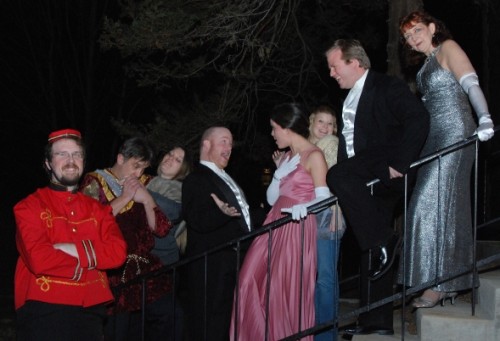 Looking at the stage for the Heritage Players production of Ken Ludwig’s Lend Me a Tenor is an exercise in time travel. Even before the show begins the sound of opera music wafts through the air, presumably from the antique radio in the far corner of the set. Everything from the teal, pseudo-William Morris wallpaper, the satin bedcovers, the elegant white settee creates the impression of a 1930s hotel suite suitable for a famous, wealthy man. Courtesy of the set designer Al Gillis and the decoration crew (Damien Gibbons and Katie Sheldon), it is a fitting background to what is by far one of the funniest plays I have ever seen! 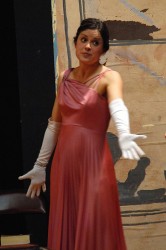 Lend Me a Tenor begins with Maggie Saunders (Erin Stauder), daughter of the Cleveland Opera Company’s manager, listening with rapt adoration to the music of Tito Merelli (Daniel Douek). The manager’s assistant and Maggie’s long-suffering boyfriend, Max (Stephen Michael Deininger), is put out by her affection for the singer, even more so after Maggie confesses she wants one fling before accepting Max’s marriage proposal, and has her eyes on the renowned tenor. She decides to hide in the bedroom closet and wait for Merelli to arrive for his charity performance of Otello.

He finally does in the company of his jealous wife Maria (Patricia Morgan). The tenor’s affection for attractive women and his refusal to take his medicine has caused a strain in their marriage, and a loud fight ensues. It concludes with Maria deciding to leave and her discovery of the eager young woman hiding in the closet.

Chaos ensues, including a suicide attempt with a spoon, a bit of wonderful operatic singing, and some surprisingly raunchy humor.

This play is a masterful work of dramatic irony, and the cast performs admirably. Erin Stauder and Ashley Gerhardt (Diana) in particular moving through the complicated blocking without a hitch. The lightning-quick dialogue, especially between Max and Mr. Saunders (John Sheldon), has the taste of an Abbott and Costello sketch. Stephen Michael Deininger conducts his rather demanding role with endearing, frantic energy, and his opera voice, when it emerges, is astounding in its clarity, accuracy, and volume. Patricia Morgan was brilliant as Tito Merelli’s disdainful Italian wife, at turns haughty and passionate, going from one to the other on a dime, and Douek as Merelli himself had some of the best comic moments of the entire show.

I paid special attention to Christopher Carothers as the Bellhop who was a consummate actor.  With few lines, but brilliant expression, he was consistently invested in each scene. The exchange between Erin Stauder and Carothers when he, in the process of putting the Merellis’ luggage away, discovers her in the closet, was positively priceless, and completely silent.

The costumes by Robin Trenner were fabulous! Heidi Toll (Julia) wore a dazzling dress that one character likened to the Chrysler Building, and the wardrobe included a full Renaissance getup (doublet and hose) for the respective Otellos. For some, the use of blackface might be a bit of a shock, but it is not by any means, in my opinion, used in an offensive way, and hearkens back to the tradition of European stage actors playing Othello in makeup.

I do not think I have ever laughed so hard in my life, and kudos to director Damien Gibbons for creating a production that never misses a step or messes up a punch line. It is definitely worth seeing, and perhaps more than once, if only to find more things to laugh about.