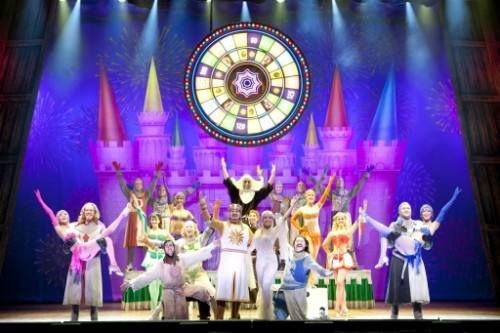 The Cast of Monty Python’s "Spamalot." Photo by Scott Suchman.

The North American tour of the Tony Award-winning romp Monty Python’s Spamalot is back in DC with King Arthur, The Lady of The Lake, a chorus of dancing knights and of course Monty Python’s hilarious brand of British humor! The tour is produced by Phoenix Entertainment, which is based out of Frederick, Maryland.

Eric Idle (Book, Music and Lyrics) and John Du Prez (Music) have created a modern musical comedy classic based on the hit comedy Monty Python and The Holy Grail. The story is a retelling of King Arthur looking for knights to join his round table. When he is told by a lovely vision to find the Holy Grail, hilarity ensues!

In the world of Python there are not any real horses. Instead, actors gallop like a horse as they hit two coconuts together. Let us not forget that in the world of Python you can have your arms and legs chopped off by a knight and still think that “It’s only a flesh wound.” 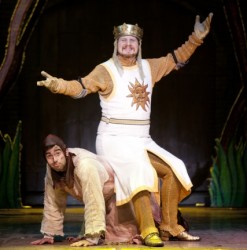 Sometimes when a tour is out for a while there is a tendency for the actors to start “experimenting.” This is not the case here. The show looks as tight as it did when I saw it early on in its Broadway run.

King Arthur, played by Arthur Rowan gives a regal performance and his singing is as good, if not better, than anyone who has played this role prior. Abigail Raye (who was an understudy at my performance) as The Lady of The Lake has a big voice and great acting chops. In Act 2, her number, “The Diva’s Lament” will have you thinking that this young lady has a very promising musical theatre career ahead of her.

In an ensemble fit for a King, these double-threat performers really get to show off their terrific acting and singing skills in “Always Look on the Bright Side of Life” and “Come with Me.”

Under the direction of BT McNicholl, who has recreated Mike Nichols original staging, the cast’s comedic timing is precise and spot-on. Scott Taylor has also recreated Casey Nicolaw’s original choreography with all the energy that the songs require. 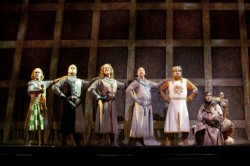 Physical elements are first-rate as well. James Kronzer has adapted Tim Hartley’s original designs for the tour without making them look like touring scenery. By that I mean all the elements of the original production are still intact. These sets are just built to load in and out of the venues easier. This tour also utilizes Hartley’s original costume designs and Mike Baldassari’s lighting is faithful to the original as well.

You may ask why is this a four star review with all the nice things I have said about this production? With everything that is great on stage, in my humble opinion there is an abomination happening in the orchestra pit. Let me explain. You see, John Du Prez and Eric Idle’s score was originally orchestrated for 18 live musicians by Tony Award-winning orchestrator, Larry Hochman. Mr. Hochman has since written several reductions for smaller orchestras.  When I saw that they were only using six live musicians, as listed in the program, I thought that maybe they were going for some medieval chamber thing. However when the show started, what I heard was something resembling the full 18 piece orchestration. I then came to realize that this tour is utilizing digital orchestral enhancements to augment the six live players. While the conductor is able to control the tempos, not using all live musicians is still unacceptable in a live, professional theatre presentation and should be kept to cruise ships, which often use this technology. I am well aware that most audiences are not bothered by this and maybe it won’t hinder your enjoyment of this production, but it left a sour taste with this musical theatre purist.

If you “Always look on the bright side of life” and pay attention to what is happening on stage in this production of Spamalot you will have an enjoyable evening with King Arthur and the rest of the iconic Python characters.

Running time 2 hours and ten minutes including one intermission

Editor’s Note:  Sir Lancelot is played by Adam Grabau who is from Columbia, Maryland.