The Addams Family at the Hippodrome 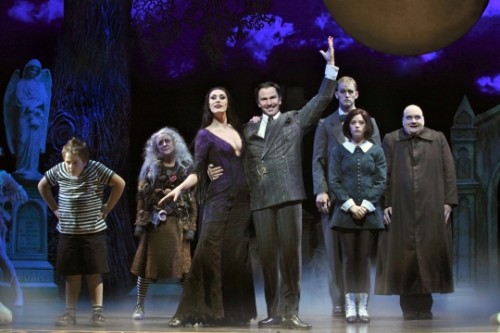 Move over Annie, a new comic-strip based musical is in town at the Hippodrome and it’s so good, it’s creepy!

The Addams Family, based upon the 1930’s comic-strip by Charles Addams, has been adapted to the stage with the script written by Marshall Brickman and Rick Elice, of Jersey Boys fame, which won the 2006 Tony Award for Best Musical.   Before the stage musical version, however, you may recall the 1960’s version of The Addams Family, starring Baltimore native, John Astin as Gomez.  A popular series of movies in the 1990’s has also been made, starring Raúl Juliá as Gomez and Christina Ricci as Wednesday.

The Addams family is just your ‘average’ and, yes ‘normal’ family. I mean, what family doesn’t have their own collection of antique torture devices!?  And, just like the Addams, you hope for “darkness, grief, and unspeakable sorrow.”  This type of tongue and cheek humor is what you will find throughout this dark, musical comedy that is fun for the entire family.

In this live stage version, the story is about Wednesday (Cortney Wolfson) who wants her parents blessing before getting married to Lucas Beineke (Brian Justin Crum).  Sadly, Lucas is every parent’s worst nightmare!  You see, he is a sweet, smart young man with a respectable family from Ohio! So, after Wednesday tells her father, Gomez (Douglas Sills) of the engagement, she asks him to keep the news secret from her mother, Morticia (Sara Gettelfinger) until after they have “one normal night” with the Beineke family; Mal (Martin Vidnovic) and Alice (Crista Morre).  On this ‘normal night,’ both families will be putting their best foot forward as they meet each other for the first time.  What happens at their evening of dinner will change everyone’s lives forever! 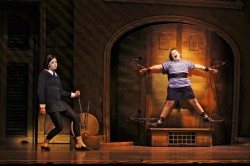 From leading role to chorus member, all the performances in this tour are to die for!  Douglass Sills as Gomez, the patriarch of the family, looks debonaire with his pinstripe suit, dashing grin, and attractive Latin accent.  Gomez is always doting on his wife, and there is no wonder why.  Sara Gettelfinger as Morticia is a goth wife and mother who  finds the right balance between being sarcastic and sultry, yet appropriately blasé.  Cortney Wolfson as the ultimate princess of darkness, Wednesday,  shines vocally, especially during the song “Pulled,” where she is being pulled in a new direction where she is starting to even like “sunrise in wide open spaces.”  Blake Hammond is lovably strange as Uncle Fester while Christy Morton as Grandma receives some of the biggest audience laughs of the night with her funny quips. 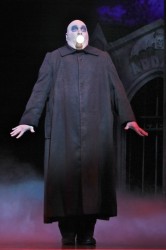 The songs by Andrew Lippa are funny, fun, and full of life.  Herein lies the problem with some dark humor enthusiasts which might be disappointed with the cheery music.  They would probably have preferred the off-beat, dark, and quirky musical stylings of Danny Elfman, who is known for such films as “Nightmare Before Christmas” and “Beetlejuice.”

While The Addams Family is a show that you can take the whole family to, a couple of minor adjustments would make this production ‘Disney’ worthy.  Young Pugsley, for example, is seen smoking a cigar briefly in one scene.  Also, making Morticia’s dress a little bit more modest would make her costume more classy.

If the standing ovation at the end of the performance I attended is any indication of how much audience’s are enjoying the show, then you too might want to get your tickets before the Addams family leaves to haunt the next town.