The Who’s Tommy at Shenandoah University 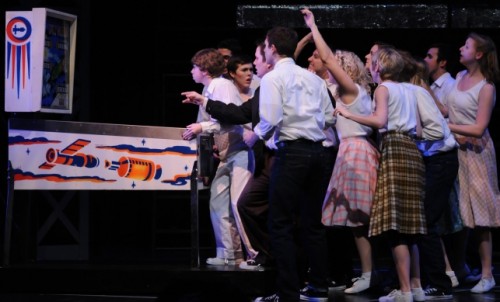 "The Who’s Tommy" at Shenandoah University. Photo by Alan Lehman.

I have seen the band in concert several times and I have seen the National Touring show of The Who’s Tommy. I knew Shenandoah University had a great reputation for dance, drama and music. However, I was not sure they could pull off this rock musical. I was corrected! They put together a great band to play the score and one of the guitarists even played a Gibson SG guitar, the same type Pete Townshend played in The Who’s hay day.

The show opens with the band playing on risers above the stage. Below the band on the riser is a screen displaying the date and images. Then there is the stage where the action takes place. William Pierson, the scenic designer deserves credit. Frank Blackmore, the Video Engineer also deserves credit for the video images. A great example was the hands being displayed during scene seven where Uncle Ernie (Mark Alpert) abuses Tommy (Kacey Willis). The point is delivered but done with as much taste as possible. 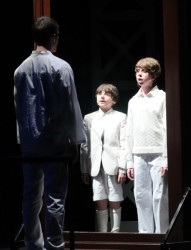 The youngest stars of the shows were Jordan Armel, who played the four year old Tommy, and Kacey Willis who played the 10 year old Tommy. The young actors played the role of a “dumb, death and blind kid” to perfection, all while showcasing some singing talent as well. Their interaction and singing with the adult Tommy (Michael Ehlers) shined in “See me, Feel me” and “Go To The Mirror, Boy.” Michael showed his talent with numbers like “I’m Free,” and the “Finale.” He might not have sounded like Roger Daltrey or Pete Townsend; However, he sung his heart out and was technically sound.

There was a lot of dancing in this musical. It was apparent from the beginning when the ensemble danced to the “Overture.” Choreographer Elijan Alhadji Gibson took risks with her dance numbers. The moves included flips, spins, and jumps. The cast was up for the challenge and the end product rivaled the best dance scenes from professional theatres.

The musical had strong performances from the abusers, Uncle Ernie and Cousin Kevin (Robert C. Mobley). Robert made you belief he was the nasty bully. Mark pulled out chuckles from the crowd every time he had a swig from his flask. However, his most memorable scene was “Tommy’s Holiday Camp.” Director Jonathan Flom had him start the number in the middle of the audience. Alpert was able to strut his incredible showmanship literally right in the face of the theatre goers. Tamara Young was a great choice for the scene stealing Acid Queen where she displayed her incredible vocals on her number. Tommy’s parents, Captain Walker (Nicholas Cirillo) and Mrs. Walker (Bryn Harvey) also turned in solid performances. In my opinion their best musical performance was “I Believe My Own Eyes.”

Flom did a great job directing the musical with its large cast, constant music, and quick scenes. Golder O’Neill, the musical’s sound designer and Rob Jones, the sound engineer had a great sounding musical with no annoying mistakes and with a mix that was just the right balance between music and vocals. Thomas Albert was the musical director and he did a wonderful job. Marshall Wacker and Haden Olmsted provided the guitars for the band. Thomas allowed them the freedom to add their guitar sound to the score. The audience ended up with a sound somewhere between the Broadway musical score and the The Who’s sound. CJ Fiandra (bass) and Michael Williams provided a very tight rhythm section. Justin Brown, Garret Jones, and Johny Baird filled in the band with their keyboard talents and horn player Brian Kavolius added the brass accents were needed.

The production exceeded my expectations. Theses performers truly represent the future of music, dance, and theatre! I am pleased to announce that their future looks and sounds very promising thanks to everyone at Shenandoah University.

The Who’s Tommy plays through February 26th at The Ohrstrom-Bryant Theatre -1460 University Drive in Winchester, Virginia.