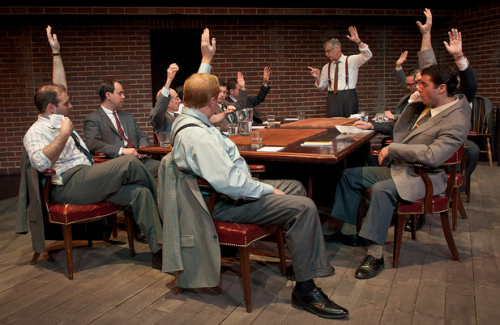 “This is not a play for a director to have a heavy hand,” says Christopher Gallu, the director of Keegan Theatre’s stirring production of “Twelve Angry Men.”  The play was originally scheduled to end on March 25th, but due to its popularity, the show has been extended through March 31st.  This is due in part to Mr. Gallu’s direction whose philosophy for the play was “to keep everything focused as much on the characters and their evolving opinions.  Luckily, I have an excellent cast.”

Though the Keegan Theatre does have the luck of the Irish, Gallu’s casting was indeed excellent!  Colin Smith takes on the role of Juror Number Eight who is alone in voting “not guilty” while the other jurors are quick to vote “guilty” without any discussion at all.  What I like about Mr. Smith’s performance is his calm, controlled demeanor in contrast to all the other jurors who are angry. 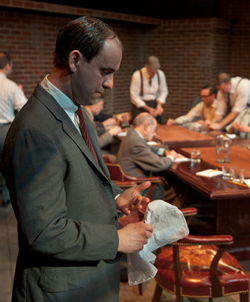 The jurors are angry because on a sweaty afternoon in NYC, these men are all confined in a jury room to vote whether or not a young man of only nineteen years old, stabbed his own father to death.  Perhaps the angriest juror of them all is Juror Number Three (David Jourdan) who, like a tractor-trailer going down a hill with no breaks, leads the charge against Juror Number Eight.  It is only when Juror Number Three seeks to take advantage of the oldest member of the jury, Juror Number Nine (Richard Jamborsky), that Juror Number Six (Rich Montgomery) bravely defends his right to make his own decision.

A poignant scene in the play is when jurors walk away and turn their backs on Juror Number Ten (Mark A. Rhea) when he goes on his racist rant.  Typically, the jurors are staged to be by a window .  Instead director Mr. Gallu chose for them to be by the water station “because it would be more powerful for their backs to be turned to the audience because it heightens Juror Number Ten’s isolation.” 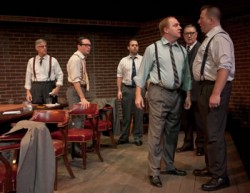 Upon entering the theatre, audience’s will be impressed with Mark A Rhea’s set.  Who would have thought that a simple brick wall and a table and chairs could look so stunning, but this is the case.  It is stunning because of the use of angles; particularly with the arrangement of the flooring, tables, chairs, and brick.  In this production, they choose to use a light reflecting a silhouette of a window on the floor, rather than a real, visible one.  For me, it would have been nice to actually see a window to help emphasize the awareness that there is a world out there where the simple things of life are happening and where the reality of racism continues. The use of an old-fashioned metal fan would have also added to the set visually to help show that it was a hot day.

There is a reason why Reginald Rose’s “Twelve Angry Men” is a classic.  It is so engaging that you may find yourself rooting for certain juror’s as I did.  Written in 1954, this story proves that audience’s have been infatuated with trials and their verdict’s long before the infamous O.J. Simpson trial.  So get a behind-the-scenes look inside a jury room and see “Twelve Angry Men” before the bailiff is ready to announce it’s next case.