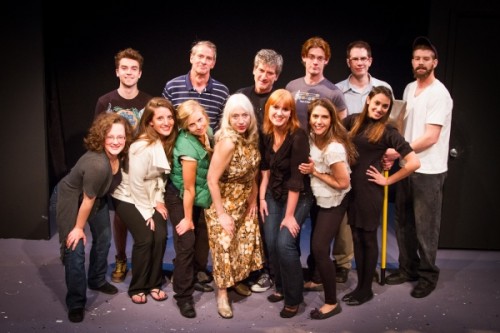 Fells Point Corner Theatre’s Second 10X10 is a must-see event for those who love good acting and fresh writing, but like to consume their theatre in short, easily-digestible chunks. The show features ten plays, each approximately ten minutes long, each carefully selected by a group of readers for inclusion (out of 69 entries, no less).

The individual plays include:

BAZOOKAS by Sharon Goldner—The story of a woman’s dissatisfaction with her personified breasts, including the threat: “Do you want to get back in the bra?”

SEVEN-ELEVEN AT THREE by Christine MacReady—A drunk woman walks into a 7-11…thinking it’s a bar.

HOT FROG by Kate Bishop—The tale of Hansel and Gretel’s witch, her granddaughter, and her new captive publicist.

DISCOVERY DAY by Amy Bernstein—Anna’s eighteenth birthday arrives in a futuristic world where eighteen-year-olds are forced to look into their own futures.

SURVEY PRO by Geoffrey Welchman—A man picks up the phone to a bewildering telemarketing survey.

THE LITNUS, THE THREATURE, THE GRUMPUS AND DAVE by Andy Grigg—The tale of Jody’s riveting quest (complete with ghosts, swordfights, and rhyming narration) to make herself worthy of Dave.

PRE-MORTEM by James Walczy—Be careful of how you answer the door. It just might be a pre-death census taker from God.

BRING A SHOVEL by Peter Davis—Self-explanatory, but what are you going to do when your brother calls you at 3 AM and asks you to bring a shovel? Probably the only straight dramatic play in the entire show.

PEOPLE LIKE US by Chris Swanson—Two very different women in the same office discover they have something in common. I don’t want to give this one away but it’s pretty moving.

KAMASUTRA by Tom Coash—A retired couple visit a Chandela Temple in India in the hopes of reigniting their marriage. It contains a pretty frank discussion about relationships and desire.

All in all, this show is definitely a success. It owes that, in part, to the hard work of the directors and actors, many of whom were pulling double shifts. Anne Shoemaker, notably, was featured in three different plays, playing three very different women (well, two very different women and a mammary gland). Josh Shoemaker and Howard Berkowitz both directed and acted. The sets were pretty minimalist, of course—with that many scene changes, attempting elaborate scene design would have been disastrous—but they were certainly effective. The blackouts were not unnecessarily long (Kudos to stage manager Kathy McCrory and assistant SM Kevin Kohlhafer, because the scene changes were remarkably fast), and featured music, making the time between scenes less tedious. Sound cues, run by booth technician Stephy Miller, were perfect.

It’s very difficult to do a show like this, and do it well. It requires a certain amount of grace, a lot of organization, and the incredible enthusiasm of its participants. Fells Point Corner Theatre had all of that. I look forward to what they show us next year.

Running Time: Two hours and 20 minutes, with one intermission.