‘A Quick 5’ with Abigail Raye 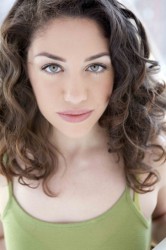 Abigail Raye has just completed a five week stint as The Lady of The Lake with the current North American tour of Monty Python’s Spamalot. Prior to that appearance she had been touring the country with Clifford The Big Red Dog. Although Abigail is semi new to professional theatre, she made a huge impression with me when I saw Spamalot at the Warner. She possesses a huge voice and knockout presence that I am sure people will take notice of very soon. I look forward to seeing more of her in the future and to introducing her to all of you.

Did you know growing up that you would be in show business?

Not to sound cliché, it’s all I knew. At an early age of 3, I starred as the Water Droplet in a show my mom directed, called Earth Kids, and I was hooked. I continued performing growing up, had an awkward sports phase through middle school, then 8th grade I got cast as Bonnie in Anything Goes and the rest is history!

Before I joined the Spamalot cast, I was on the Clifford the Big Red Dog tour as the female understudy/wardrobe hand. I went on a few times as “backside” of Clifford, which was totally awesome and the best work-out of my life.

TRAVELING AND GETTING PAID FOR IT! 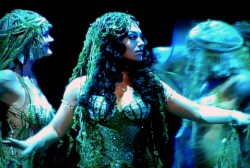 What are some of your favorite roles that you have played thus far?

Obviously, I’m the luckiest gal in the world getting the chance to play Lady of the Lake! It’s my dream role, and I couldn’t be happier! In addition, I loved playing The Leading Player in Pippin, and Edwin Drood in The Mystery of Edwin Drood.

After you finish touring with Monty Python’s Spamalot where can we see you in action next?

Getting back to the grind and auditioning, with a minor break in May for a Bermuda vacation.