‘A Quick 5’ with Ann Harada 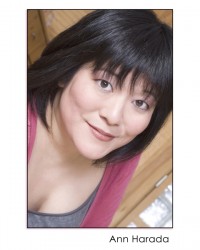 Ann Harada is currently appearing in the hit TV series, Smash on NBC. Ann has an impressive resume. Broadway credits include 9 to 5, Avenue Q, (Off Broadway premiere as well), and Seussical. She can also be heard on all 3 of those cast recordings. Other credits include M Butterfly, Les Miserables, and Mikado Inc at Paper Mill Playhouse, which was where I first saw Ann perform. Having followed Ann’s career for a while, I am thrilled that millions can now see her weekly on Smash. So nice when it works out that way…

I got a job at the Boothbay Dinner Theatre when I was a junior at college. We got paid a very small weekly salary plus all the tips we made as waiters at the theatre. We served drinks, appetizers, dinner and dessert. Mostly everything was finger food so we didn’t have to use metal utensils that would make noise. We’d open the house, serve drinks and appetizers, do a cabaret, serve dinner and dessert, then do the show. And then go out afterwards! And then repeat 6 days a week, including rehearsing the next show during the day! And I was 20 so I could do that without dying! 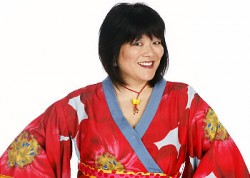 You started with Avenue Q when it was downtown. Did you know at that time how big the show was going to become?

Of course not.  How could any of us have imagined what a phenomenon it was going to be? I think we just felt excited to be performing something that truly amused us.

You performed in 9 to 5 on Broadway. What are your remembrances of working with Dolly Parton?

Oh, I just adored her and she was nothing but kind to all of us. She would sneak in the side door and watch the show on the monitor in the stage manager’s office on a regular basis, then stand in the wings and high-five us as we came off the stage after curtain call. Sometimes she would make us homemade fudge. On those nights when we’d have to stop the show due to technical difficulties, and she happened to be around, she would always go out and thrill the crowd by singing “9 to 5” with the orchestra. In short, you should all be so lucky to work with her sometime! 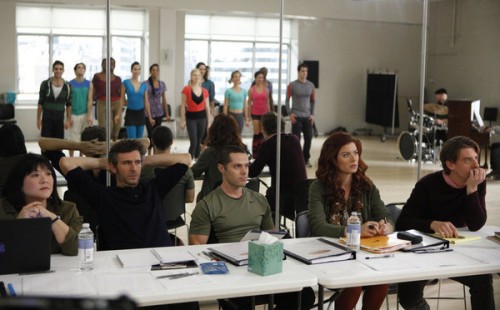 You are currently part of the hit TV series Smash. How is the rehearsal process on a TV show different from rehearsing a regular theatrical production?

We spend most of the rehearsal blocking the shot as opposed to worrying about the intent of the scene. Sometimes if one of the actors is making a choice that is too interesting, the director will give them an acting note, but it usually all about where the camera is going to be set up and how we are going to shoot it from different angles. Occasionally there might be a problem with the scene itself and we would discuss content with the writer and director while we were blocking, so lines would get changed on the fly.

Whereas in a theatrical production, you might not get around to staging until after days of table work and even then, change the blocking constantly, because you have the time to do so.

With Smash being picked up for a second season will you be performing onstage anywhere as well?