‘A Quick 5’ with Francesca Faridany 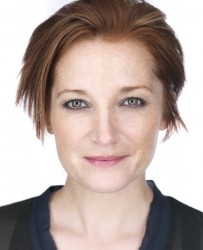 Well, the first play I was in that people paid money to see was The Broken Heart by John Ford at a venue called The Arts Threshold in London. I hesitate to call it my first “professional” job because I’m pretty sure we didn’t get paid. I had recently graduated from three years of training at The Drama Centre in London and most of the company were fellow graduates. My first paycheck as an actor was doing an evening of three Thornton Wilder one-acts at the Marin Theatre Company in Mill Valley, CA. It was called Wilder, Wilder, Wilder and consisted of The Pullman Car Hiawatha (I played Harriet, the pre-cursor to Our Town’s Emily), The Long Christmas Dinner and The Happy Journey to Trenton and Camden. 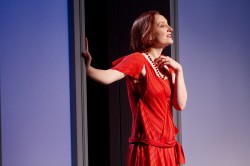 Playing Nina Leeds in Strange Interlude I imagine is like running a marathon. How do you prepare mentally and physically to play her eight times a week?

I sleep 10-12 hours (thanks to a fantastic nanny – my daughter is 22 months old and is here in D.C. with me a lot of the time), drink 3 to 4 liters of water, and do at least 30 mins of yoga every day. Then there’s a weekly massage and my staple, almost daily, meal of Teaism’s Indian Spinach Curry and a cup of Chai.

I try to stay calm. That’s a big thing having realized over recent years how exhausting and draining being stressed out is. When you know that your energy dollars have to get you through an eight show week that adds up to approximately twenty four hours onstage, playing O’Neill, you start to pay attention to not wasting them.

There is a kind of enforced meditative calm that comes from doing such a huge role, in that you really only have the capacity to be in the moment and say the next line. It is harder than usual to get ahead of yourself and play mind games.

Routine is my friend. I love it. It is hugely calming. The hour spent getting ready before a performance is blissful time in that regard. Getting hair in pin-curls (wig prep), make-up done, vocal warm-up, and checking in with everyone along the way. There are such good people at the Shakespeare Theatre Company, onstage and off. There’s a lot of love and support there.

You performed in The 39 Steps on Broadway in which all of the actors play a plethora of characters. Can you please talk about what the rehearsals were like to get all the quick changes down?

It’s easy to overlook the fact that there is an awful lot going on begin the scenes to make a play work. In both The 39 Steps and Strange Interlude we actors are heavily outnumbered by those backstage. And the quick changes are choreographed within an inch of their lives. I played only three characters in 39 Steps (that’s in comparison to the two men who play, I think, 150 roles between them) but I have far more changes in Strange Interlude and four or five of them are REALLY fast. I have twelve costumes and eleven changes. There is a small army of dressers to help us all and we each have one gal assigned to us specifically. Jeannette is my right arm, my compass. She is always there when I come offstage, armed with a bottle of electrolyte water, some Kleenex and a hairbrush, and remains close by until I go back on. At one point I asked her to make sure I got back onstage because I was so tired that I worried I’d nod off in my one and only 5 to 7 minute respite. She makes sure I don’t go on with mascara halfway down my face from the previous scene’s emotional goings on, that I have my wedding ring on for the right scene, that I get into the right costume. It sounds implausible but there have been many times when I’ve come offstage and had absolutely zero idea what happens next and where I’m supposed to be. I just have to find Jeanette.

The crazy changes are the ones that involve a wig change too. In one we have 45 seconds:  I undo the belt on my dress and take my jewelry off as I exit, Chrystal undoes the back of the dress and pulls it and the slip down while I kick off my shoes. Jeanette is on the ground to guide my feet into the new shoes as I step into the new dress that Chrystal is holding and then sit down to help Josh get the new wig on (he has already taken the other one off while all that was going on), Jeanette does the front of the dress up while I put on new jewelry and some red lipstick and at about that time Hannah, one of the stage managers, is telling us we need to be walking. I stand and get handed sunglasses to put on as I go, while Josh follows putting a final couple of pins in the wig. Fun, right!? It is totally fun now that we have it down. But it took a few goes to hone it.

That change is only topped by the second intermission in which there is a full clothes change: corset, stockings with garter belt, dress, shoes, wig, jewelry, different make-up AND, just for kicks, while I’m in the wig chair with Josh I am applying a coat of Sally Hanson’s ‘Rapid Red’ to my nails. All this in less than 10 minutes.

What is your favorite Eugene O’Neill play?

I would have to say Strange Interlude. It’s the only one I’ve worked on and therefore really gotten inside of. This woman, Nina Leeds, is so fantastically multi-faceted. I have such a love for her complicated, flawed, passionate, questing, wounded, smart and human self.

After Strange Interlude where will you be performing next?

I have no idea. Ah, the actors life. I do know there’s a vacation to be had though.