‘Be Careful! The Sharks Will Eat You!’ at MetroStage 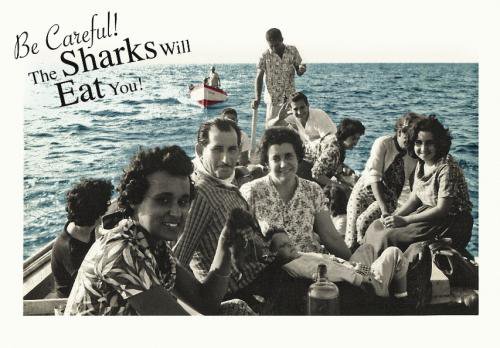 “Be careful! The sharks will eat you,” a terrified, wondering little Jay is told as he clings to the sides of the boat that is taking him to the U.S. in the dead of the night…and away from all he has ever called home.

Jay Alvarez, whose theatre and television credits are numerous from coast to coast, narrates the story of Chiqui and Humberto’s daring escape from Castro’s Cuba in 1964 in Be Careful! The Sharks Will Eat You!, directed by Theresa Gambacorta and playing now at MetroStage.

This one-man show is clearly a worshipful tribute to a mother and father who risked all to be with their children, at a time when many families were parted forever. 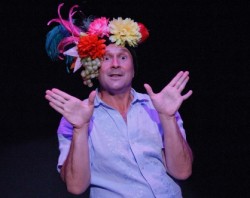 Jay Alvarez in his one-man show, 'Be Careful! The Sharks Will Eat You!' Photo by C. Stanley Photography.

While certainly compelling and definitely tear-jerking in many places, warmth, love and even plenty of laughter flavor this beautiful, uplifting family story on stage. Alvarez depicts each character completely solo with great agility in this performance of half-theatre, half-storytelling.

It is impossible not to recognize all families in this story of one family, and audiences are likely to come away with some sense of having been a part of the story or shared something in common with the characters. I personally was especially moved by the fierce devotion of Alvarez’s mother, Chiqui, and his grandmother, who refuses to get onto a boat until her sons are with her. Alvarez’s depiction of motherhood (not to the exclusion of fatherhood) from these women’s viewpoints is quite powerful.

As someone who has some familiarity with storytelling, I was impressed by Alvarez’s ability to maintain the high level of emotional energy the show demanded, as well as his ability to connect with his audience not just as spectators, but as listeners in an intimate setting. Alvarez does a masterful job of embodying his family members and neighbors in such a way that it seems each of them has a voice in the story, sharing parts of it, however brief, themselves. His energy and physicalization of men, women, elderly, children, and even television icons, all while passionately speaking to his audience, are very engaging.

The show is designed in such a way that it is family-friendly, although the nuances of the political background, simplicity of set and spurts of Spanish may lose very young audiences. 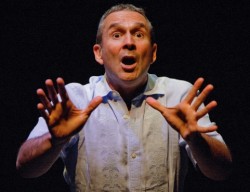 Jay Alvarez in his one-man show, 'Be Careful! The Sharks Will Eat You!' Photo by C. Stanley Photography.

The set, sound and lighting do a great job of providing a rounded experience for the senses, without competing with or overwhelming Alvarez’s performance. The purity of the storytelling experience is tastefully enhanced by sounds of voices in the background, Cuban music, and newscasts. Large photographs also appear as background, bringing to life the people, places and times. A portrait of his parents, presumably with himself as a child, is lovingly depicted toward the end. The lighting was also remarkably effective in its simplicity, especially in the tense parts of the story during the night time escape. Everything seems to be an extension of Alvarez himself.

I would say this performance is a concoction of theater, family narrative and storytelling, and it is interesting to note that it is bound for evolution. Gambacorta (who has directed other one-person shows before) and Jay Alvarez write that there are plans and hopes to bring the show to Broadway, and music is already set to be composed by jazz musician Paquito D’Rivera.

Be Careful! The Sharks Will Eat You! is an important, engaging and wonderful tribute to the experiences of just a few of the many people who have left their homes to come to the U.S. in search of freedom.

Running Time: One hour and five minutes, with no intermission. 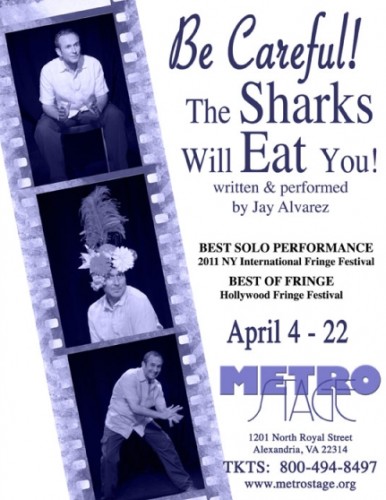