‘Dolly’ Matches Up Well at the Spotlighters 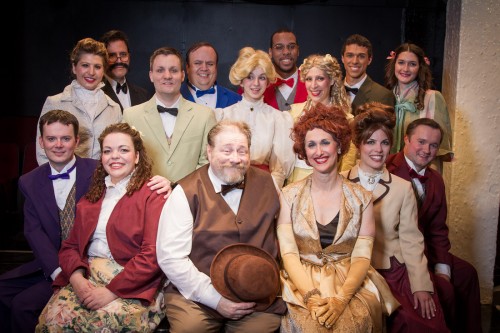 Mounting a big splashy musical such as Hello, Dolly! on the cozy 13 by 16-foot in-the-round stage of the Audrey Herman Spotlighters Theatre was sure to be an ambitious, if not impossible, challenge to say the least. But anyone who knows the type of magic Director Fuzz Roark can bring to theatre should not have any doubts.

“There is nothing like tackling an iconic show like Hello, Dolly! to make even the bravest and most experienced of directors a bit wary,” Roark wrote in the program notes. “Well, let’s just say that I love a challenge!” He as well as his talented cast and crew met that challenge and more.

As such, the Spotlighters 50th anniversary season, which brought to Baltimore theatre lovers Tea & Sympathy, The Fantastiks, Ain’t Misbehavin’ and Agnes of God thus far continued its celebration with a joyous, effervescent production of Hello, Dolly! 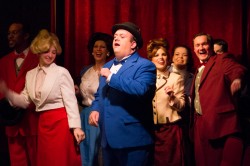 A mega-hit on Broadway, Hello, Dolly! starring the incomparable Carol Channing, boasted a run of 2,844 consecutive performances that began in 1964, making it at the time the longest running musical. The 10-time Tony Award winner called the St. James Theatre its home for seven years.

Jerry Herman (Mame, La Cage aux Folles) penned the tuneful music and lyrics, and Michael Stewart wrote the book for the show that had its origins in Thornton Wilder’s 1938 farce The Merchant of Yonkers, which he later re-titled to The Matchmaker in 1955. And the plot itself stemmed from an 1835 English play, A Day Well Spent.

Considerable zaniness and chaos ensues amidst the solid acting, dancing and vocal performances by the cast, and in the end, all the characters carve out new paths for their lives.

Spectacular, colorful period costumes were created by Laura Nicholson. Her attention to detail was astounding, and in every scene it was as though a palette of bright hues donned by the cast members was splashed across the stage.

Roark’s skill for spatial economy helped utilize every nook and cranny on and around the stage to accommodate a 16-member cast needed to pull off this magical fast-paced show. Set Designer Alan Zemela as well as Roark managed to make the production look big even in a small venue. The clever trap door to simulate a cellar at VanderGelder’s Hay & Feed, Irene Molloy’s hat shop and the scene in the Harmonia Gardens restaurant were excellent examples of this creativity. Choreographer Kristen Cooley also made good use of the limited space with her creative formations for the dance numbers.

And what would Hello, Dolly! be without the music? “It Takes a Woman,” “Put on Your Sunday Clothes,” “Dancing,” “Before the Parade Passes By,” “It Only Takes a Moment,” and, of course, the classic title song, “Hello Dolly” were stirring, sentimental and tuneful. All the numbers amplified the plot splendidly and were performed well.

When there is a live orchestra, the maestro follows the vocalists as they perform their numbers. When the music is not live, as in this case, the vocalists must keep pace with the music. It’s a challenge for the cast but overall they succeeded. 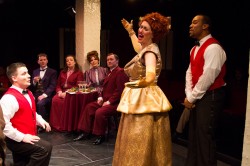 But several solo performances were drowned out by the volume of the off-stage music. Both Maribeth Eckenrode (“I Put my Hand In”) and Bob Ahrens (“It Takes a Woman”) were victims of the volume mismatch. The best musical performances occurred when the ensemble kicked in. With the multiple voices, they deftly overcame that hurdle.

Nonetheless, Eckenrode, a veteran of the Spotlighters (The Great American Trailer Park Musical) and Toby’s Dinner Theatre (Mid-life! The Crisis Musical) delivered a fine performance as the mischievous, scheming Dolly and sang admirably considering the volume issue. She hit some big notes in her numbers and was fun from the start.

Bob Ahrens (Man of LaMancha, Tea & Sympathy) played the cranky VanderGelder role well but his vocals were not particularly strong.

Eileen del Valled (The Great American Trailer Park Musical, Sweeney Todd) as Irene Molloy is a powerful vocalist. Her rendition of “Ribbons Down My Back” was exceptional, with her voice rising over the volume of the background music.

Justin Johnson (Tea & Sympathy) as Ambrose and Holly Gibbs as Minnie exude enough energy to light up a small town. They each have commanding stage presence and timing.

My apologies for the pun, but “hats off” to Gibbs for seamlessly ad-libbing when a snafu on the set occurred. A large hat in the millenary shop accidentally fell from the pillar it was mounted on. In character, Gibbs didn’t miss a beat. “I’m so sorry Miss Molloy,” she repeated as she attempted to fix the prop.

Much of the comedy was manifested by the duo of Cornelius and Barnaby, played to the hilt by Bart Debicki (The Fantasticks) and Jeff Baker (The Rocky Horror Show), respectively. They fed off each other precisely, and with their over-the-top style and their brightly colored suits, these guys provided laughter throughout.

Steve Avelleyra (West Side Story) as Rudolph, the Head Waiter, also added to the comedy and showed off some skilled tap dancing as well.

Small stage notwithstanding, this fun-filled, well-performed, beautifully costumed, tuneful production of Hello, Dolly! is a good match for the Spotlighters and is highly recommended. Dolly would agree.