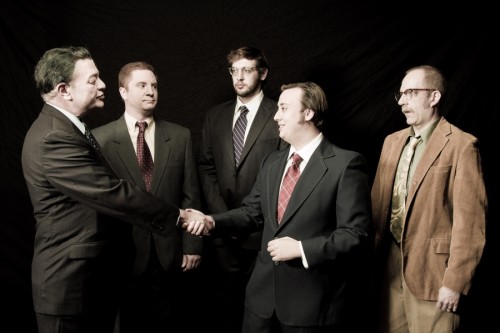 Frost/Nixon, currently playing at the Vagabond Players, documents an iconic moment in American television. The year is 1977, and the American people are still reeling from the Watergate scandal, the White House cover up, and Gerald Ford’s pardon of Richard Nixon. Nixon, now a retiree in Southern California, is desperate for a way to rehabilitate his image, while playboy British talk show host David Frost needs to get back in the US public eye. What ensues is a battle of wits with careers, pride, and the morale of an entire country at stake.

Obviously a portion of this play is context-specific (a working knowledge of Watergate may be required for full appreciation) but it is nevertheless a gripping drama about a nation desperate for an apology and an interviewer trying to squeeze one out of a career politician.

A play based on real people and real history cannot be conducted successfully unless the actors completely commit, and in this case the Vagabond Players certainly succeeded. Jeff Murray’s Nixon is incredibly awkward, the spitting image of a socially inept man thrust into the limelight by his ambition. It occasionally crosses the line into caricature, but with a character as iconic as Nixon such moments are impossible to avoid. The consistent dabbing of his upper lip (a habit the real Nixon had after losing the 1960 presidential debate due to his horrible close-up) was a nice touch. 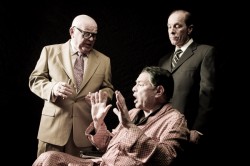 The real shining star of this play, however, is Nixon’s counterpart. Michael Zemarel (Frost) has captured the British host’s confidence and laissez-faire attitude perfectly, everything from the changing body language during the course of the Nixon interviews to Frost’s careful Received Pronunciation English accent. The look on his face when he realizes he has Nixon in a vulnerable position is an incredibly nuanced expression of both victory and pity.

The frequent scene changes necessitate a pretty minimalist set design—mainly a blank blue wall and a few chairs, but kudos to set designer Roy Steinman and his crew for replicating the Presidential seal and the visual of the Oval Office for Nixon’s resignation broadcast. Stage and assistant stage manager Andrea Bush and Ruta Kidolis kept the blackouts to a minimum, and the scene changes were efficient, often interspersed with excellent sound cues from sound designer Dennis Wood. Despite lacking an intermission, the play never lagged, and that is to the tech crew and director Steve Goldklang’s credit.

If you want to see a watershed moment in American history live on stage, complete with British accents, subtle jokes, political intrigue, and the former president of the United Statesstating on television that “if the president does something, it’s not illegal,” then absolutely go see this play. It is not particularly flashy, but then again, as well-written and well-acted as it is, Frost/Nixon does not need to be.