‘Memphis’ at the Hippodrome Theatre 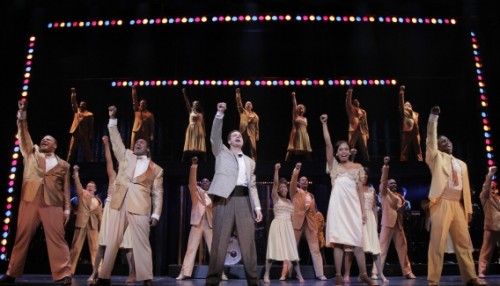 The National Touring cast of MEMPHIS, now playing at the Hippodrome Theatre. Photo by Paul Kolnik.

Get ready to rock ‘n’ roll!  ‘Memphis’ is in Baltimore at the Hippodrome Theatre.

Winner of the 2010 Tony Award for Best Musical, ‘Memphis’ takes place in 1950’s Memphis, where rock ‘n’ roll and interracial relationships are both taboo.

In John Waters’ 2002 musical version of ‘Hairspray,’ which takes place in Baltimore, both of these topics have been explored before, leaving the plot of ‘Memphis’ to not be an original concept. 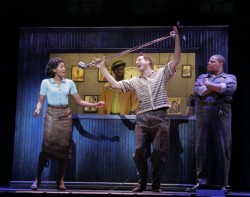 With that said, the topic of race is still relevant in today’s society which is still affected by inequalities and prejudice, such as race, religion, gender, and sexual orientation.

One thing that is equal is the quality of talent that is on the Hippodrome stage.  From ensemble to the leading roles, everyone does a fine job.

Bryan Fenkart as Huey is UNSTOPPABLE as the young, white DJ who falls in love with a black singer, named Felicia.  Fenkart, who is only offstage for 10 minutes during the whole show, has terrific vocal chops and is also good at making the audience laugh, as with the following lines, written by Joe DiPietro:

HUEY (into mic): “Hockadoo! This is Huey Calhoun, your new host of “Boppin’ with the Blues,” the number one program in Memphis!”

SIMMONS: “What’s he talkin’ about, number one program? He’s only been on the air four days.”

Felicia, played by Felicia Boswell, is a vocal tour de force, singing song after song, without seeming to take a breath!  The songs “Colored Woman” and “Love Will Stand When All Else Falls” are vocal and emotional workouts well-performed by Boswell.

Not everyone is accepting of these two young lovers.  This includes Gladys, Huey’s mother, powerfully played by Julie Johnson.  In the second act, Johnson, along with Delray (Quentin Earl Darrington), Gator (Rhett George), and Bobby (Will Mann) brings down the house with the soulful song, “Change Don’t Come Easy.”

Delray, Felicia’s older brother, is also opposed to change, at first. During the song “She’s My Sister,” Delray exclaims to Huey, “The danger is deep that you wanna put her in. I don’t care about you, but she’s my sister.”

The music from ‘Memphis’ is written by Bon Jovi keyboardist David Bryan. 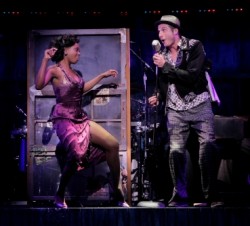 Mr. Bryan was attracted to writing the musical because of “The story. It’s an epic American tale about the birth of rock ‘n’ roll.  I just love that we not only portray one of the first white DJ’s to integrate the radio, but we also dramatize an interracial love story (when it was against the law in many states to have an interracial marriage.  Ultimately, it’s a story about how music helped bring about social change, and how this music helped bring people together.”

The dances, expertly choreographed by Sergio Trujillo, helped to bring the music to life.

Look for high-flying splits, back-flips, and other tricks from this talented group of nimble dancers.  The dancers work so hard that the touring show must do 6-10 loads of laundry a day to clean the sweat off their costumes.

The heart of this musical is the story, written by Joe DiPietro.  His script won the 2010 Tony-Award for Best Book of a Musical. 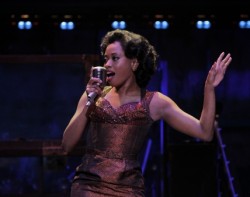 Felicia Boswell (Felicia) in the National Tour of MEMPHIS. Photo by Paul Kolnik.

What sparked his interest in writing the book, he says, was that “the initial idea was suggested by a producer with the incredibly theatrical name of George W. George, who had read about a revolutionary DJ out of Memphis in the early ’50’s. The DJ’s name was Dewey Phillips, and he was pretty much radio’s first shock jock; wild, outrageous, untamable.  He also had a love for rhythm and blues and was the first to play it in the center of the radio dial in Memphis (a dangerous thing in those days, since radio was as horrifically segregated as society.) So I took the germ of Dewey’s life, added elements of other DJ’s of the time, and created a fictional story that tells the tale of a rock ‘n’ roll rebel who breaks down barriers during a time that changed this country forever.”

This rock ‘n’ roll musical won’t be in town long, so catch ‘Memphis’ before it leaves Baltimore!