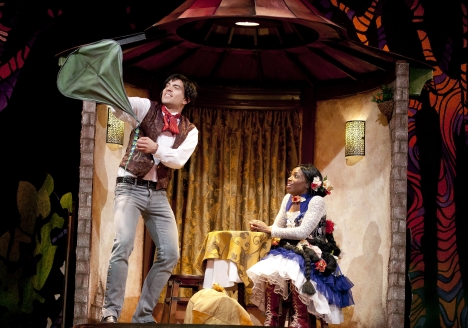 With a Broadway style score, an eye popping production concept and a great cast in tow, Imagination Stage scores big with its current production of Rapunzel.

The story of the girl with the really long hair who is locked in a tower by an evil witch and who later meets and falls in love with a handsome prince is given a first class treatment in production and writing talent. 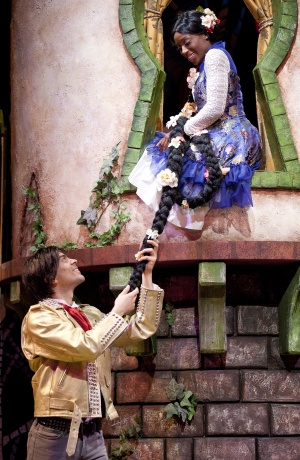 The show is written by the team responsible for the TV show, Friends. David Crane and Marta Kauffman(Book and Lyrics) and Michael Skloff (Music) have created a Broadway style score with clever titles like “Me, My Hair and I” and a song about letting go that speaks to all parents called, “Growing Up.” The book and songs never pander to the audience which is always a plus with this kind of material.

While the story is told in a traditional manner, there are some modern twists added. Scenic Designer Milagros Ponce de Leon has designed Rapunzel’s world to have a revolving tower for her to be locked in. Other touches include flying trees and a full village as a ground row down front complete with light up houses. Lighting Designer Zac Gilbert has also solved the problem of how to do a star lit night. As opposed to a star drop Gilbert has placed twinkle lights in strategic positions around the theatre making for a nifty night effect when it is needed.

Imagination Stage’s Associate Artistic Director Kathryn Chase Bryer has directed the show with a great amount of energy without it getting in the way of the more dramatic moments. This show could have been very easily directed to get past the “slower” points and get back to the high energy sections. Bryer lets the material breathe and the scene where Rapunzel and her prince start to fall for each other after the witch has turned the prince blind is quite touching. 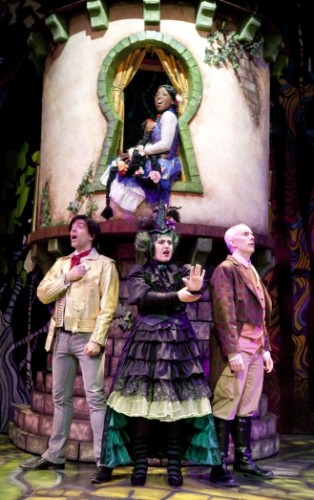 The cast of RAPUNZEL at Imagination Stage (L to R: Jonathan Atkinson as Prince Brian, Felicia Curry as Rapunzel - above, Gillian Shelly as the Witch, and Michael John Casey as Simon). Photo by Scott Suchman.

Imagination Stage always ramps it up when it comes to casting and Rapunzel is no exception in this department. Rapunzel is played by none other than the radiant and wonderful, Felicia Curry. With her infectious smile and always great singing voice there is no way to not root for our heroine. Curry has great chemistry with her Prince Brian, played by Jonathan Atkinson, who possesses a nice singing voice and good acting talent. It would have been very easy for the prince to be very one dimensional and stiff. Atkinson makes all the right choice and comes out a winner.

As the Witch, Gillian Shelly plays her as more controlling than a screeching mad women. Considering all she needs to do is give a “Twist of the wrist and a turn of her ring”, this is a fine choice. Her costume designed by Frank Labovitz is something to behold. The headpiece alone is enough to get your attention.

Michael John Casey as Simon the prince’s assistant and assorted other characters shows his range of versatility. He plays the narrator, a hair dresser and later on a bumbling king who can never seem to get Rapunzel’s name right. With each character Casey’s sense of comic timing comes through strong.

I want to compliment Music Director and Orchestrator Christopher Youstra for creating a non- cheesy sounding track for the performers to sing to. Live music is always best but if you are going to use recorded it should sound as real as possible. Youstra has achieved this and his always great vocal work is allowed to shine.

For kids and parents alike, Rapunzel at Imagination Stage provides so many wonderful things. With Curry and company, a stellar production concept and a fantastic score this is one that the whole family will enjoy and hopefully tell others to attend.

Running Time: 75 minutes including one intermission