‘Side Man’ at Providence Players 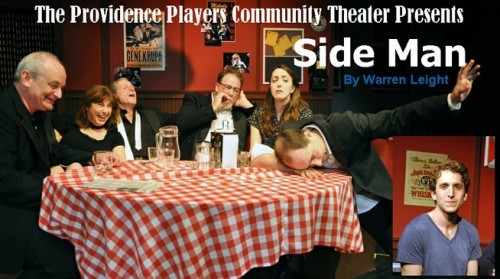 The Providence Players of Fairfax, Virginia are raising the bar high for area community theatres.

Side Man, written by Warren Leight, is set in the New York City jazz scene over a span of time from 1953 to 1985 and follows the tight-knit group of jazz musicians, waitresses, lovers and friends that are a family all their own.

Clifford Glimmer (Ari Post), who is a young man at the beginning of the play, reminisces about his upbringing in this small, fading world of nighttime jazz clubs, and tells the story of the ill-fated marriage of his father and mother, Gene and Terry.  Clifford is the quintessential child who must be an adult from a very young age to make up for the lack of responsibility taken by his parents.

It all begins when Gene (John Coscia), a gifted trumpet player, falls in love with Terry (Andra Whitt), a sheltered young woman on her own in the city after a sudden divorce. Unbeknownst to her, however, Gene is already ‘married’ to the jazz scene, along with his fellow musicians, Al (David James), Ziggy (Craig Geoffrion) and Jonesy (Bobby Welsh). Gene’s inability to extricate himself to live in a settled ‘real world’ with his family becomes an unforgiveable betrayal that insidiously destroys them. 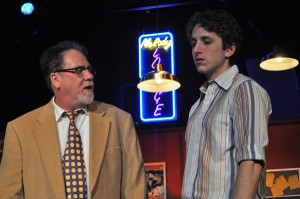 Certainly, at every turn, the story is heart-breaking, but also utterly hilarious. What will speak to audiences is the incredibly well-captured individuality of the musicians, Terry, and Patsy (Christina Thronson), the waitress and sometime lover of several of the musicians and a stable constant in their Melody Lounge home.

The set, lighting, and sound design are professional quality! Set designers Raedun Knutsen and Chip Gertzog outdid themselves, somehow creating a multi-dimensional representation of the night clubs, stark basements, and tiny apartments with stunning detail. The set is colorful and intricate, right down to a bar that is built onto the side of one of the walls and decorated with bottles, vintage art and even a cigarette machine.  The use of recorded, instrumental music is blended seamlessly throughout.  One memorable moment that uses both elements of sound and lighting is a dramatic silhouette of Gene playing the trumpet.

The actors are masterful in each of their roles.  The characters come to life with such vivid individuality that you come away feeling as if you know each of them, somehow, in your own memories. Watching the interplay between Gene, Al, Ziggy and Jonesy alone provided a feeling of depth that I am more accustomed to encountering in a well-written novel, which is difficult to do with a group of multiple supporting characters with only so much time for individual storyline development. Each character is fleshed out and real, quite a feat for actors in a play that demands so much emotionally in the way of tension and highly-charged scenes of tragicomedy. 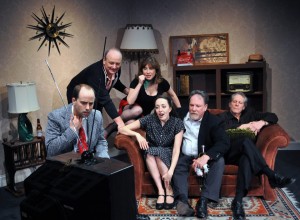 From the venue to the characters, Side Man is a collaborative masterpiece that brilliantly exhibits the essence of all that community theater can be.  I found it appropriate that from the moment I entered the James Lee Community Center, I was treated to indications everywhere that the center is a living, active place that plays an important role in the surrounding community.

The historical background of the center as a landmark school for the local African-American community and a site of civil rights justice efforts is also proudly chronicled. While this may seem a side observation, I cannot emphasize how much more meaningful it made the experience to me, because when I walked into the plush, well-maintained auditorium, my conviction that theater should be both accessible and prominent in every community was validated.

Directed by Jimmy Gertzog, Side Man is a remarkable production by a remarkable company who seem to be well-supported by the community which they serve.  The story and the characters evoke frustration and compassion, and will probably cause audiences to come away wanting to know more about the history of jazz and all the heroes of this culture who, perhaps all too quickly, faded into the background to make way for the next big craze.

Special Note: Side Man is not for young audiences. It contains mature themes and graphic language. The smoking of non-tobacco cigarettes occurs throughout the show.