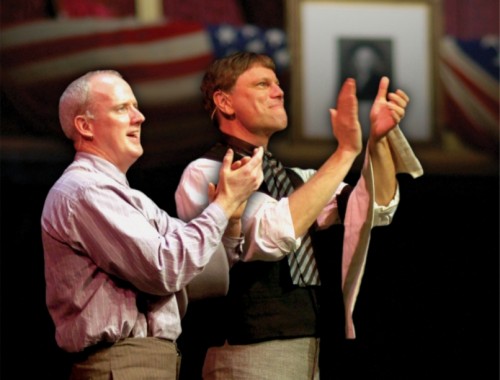 Sometimes we take for granted things that are right under our noses. If I told you there was a 40 minute play at Ford’s Theatre about the night Lincoln was assassinated you’d probably say “tourist trap” and dismiss it. If you did so, you would be missing something really good in DC theatre. One Destiny written by Richard Hellesen takes you back to April 14th, 1865 with the people that were at Ford’s Theatre on that night. Let’s start with the price point of only $5.00 per seat which includes admission to the museum in the basement of Ford’s Theatre and a performance of One Destiny. After the show your admission includes the Peterson House where Lincoln died and the brand new Center for Education and Leadership. Where else in DC can you get all of that for $5.00? Next the show is performed by two of DC’s best performers, Michael Bunce and Stephen F. Schmidt. Both performing One Destiny by day and then 1776 by night. Michael is playing Samuel Chase and Stephen is playing Richard Henry Lee.  I wish to congratulate them on a milestone with this show as well. April 20th celebrates their 450th performance of One Destiny. That is an achievement in itself and should make you want to take a trip to Ford’s Theatre to see this play.

How did the two of you get involved with One Destiny?

Michael: Ford’s Theatre Society decided to commission a short play that would provide information about President Lincoln and the events of the assassination to supplement the programs given by knowledgeable National Park Service Rangers. Why not use the theatricality a play could provide to show what the day of his assassination was like? The theatre held auditions for local actors and Stephen and I got lucky and got the gig.

Stephen: I was in the cast of Shenandoah at Ford’s and Mark Ramont asked if I would like to work on a reading of the two-man show… As a history buff I jumped at the opportunity and was very impressed with the script that Richard Hellesen had written. We worked on it for a couple of weeks and then later had a try out period on the stage at Ford’s for a couple of weeks. It was immediately clear to us and to our audiences that we had a very informative and moving piece of theatre. 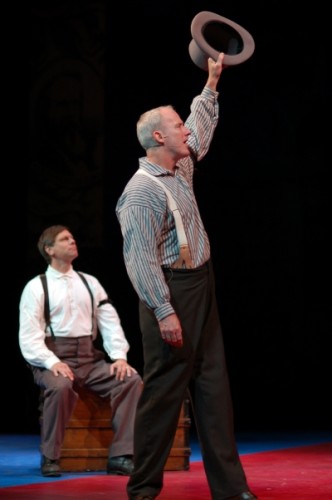 One Destiny takes place at Ford’s Theatre. Does it add something when you are performing this piece on the stage where the actual events of the play unfolded?

Stephen: One Destiny, of course, was written to be performed on the Ford’s Theatre stage and I think from both the actors’ and the audience’s point of view it is very helpful to actually be in the space where most of the story that we tell took place. We did however have a chance to find out how the play worked in other spaces when Ford’s was closed for renovations a few years back. We took the piece on the road to various schools in the DC metro area and we were very happy to discover that the play still worked beautifully even in “cafetoriums” at elementary schools!

Michael: Telling the story where the actual events take place is, I think, very unusual for any actor; and being able to have any physical connection to that place always helps with being “in the moment.” Doing the show literally right under the place where this significant event to the country and probably the world occurred makes it that much more powerful for us. Sometimes, in the middle of the show, just looking up at the Presidential Box and thinking that John Wilkes Booth landed right where I’m standing, makes it all very real.

You are coming up to your 450th performance of One Destiny soon [April 20]. How do you keep your performances fresh after playing the show that many times?

Stephen: Both Michael and I have discovered that because the script is so good and the characters are so totally human that we find ourselves saying lines that we have said hundreds of time before coming out in a completely new way from time to time. That allows us a freshness that seems to keeps the play alive and “in the moment” no matter how many times we perform it. We also seem to keep reading new material about the events of April 14, 1865 and those new perspectives and new information also help to keep the material fresh.

Michael: It has been fairly easy because Richard Hellesen’s script is so well written. We still find ourselves saying a line here and there in a different way than we had ever before, which seems crazy after all this time, but it is a testament to the script’s quality. We still find the piece fun to perform and still enjoy working together (unless my cohort is an even better actor than I thought!) and consequently it’s easy to listen to each other, the best way to keep it fresh.

While you both perform in One Destiny during the day you are also doing 1776 in the evenings. How do you pace yourselves to get through, what is by my count, an 18 performance week?

Michael: Performing both shows for a few weeks definitely helps you into a routine where all-of-a-sudden you find yourself not as tired as you had been. Eating well, getting a bit of exercise, and the all-important and ever-frequent nap definitely contribute to our vitality. Of course, there is the occasional difficult morning….

Stephen: I must say that has taken a little getting used to but with a regular schedule of exercise and proper rest (including power naps!) I think we have found a rhythm to the work week. I must also add that it is a privilege and a pleasure to perform both of these shows on the stage of Ford’s and the audience’s wonderful reaction to both shows gives us added energy that is very useful.

Stephen, why do you feel Lincoln has been written about more than any other president?

Your question makes me think about the interesting juxtaposition of performing One Destiny and 1776 at the same time.

In 1776 some of the most brilliant men in U.S. history wrestle with the problem of Slavery and end up with a compromise that eventually leads directly to the Civil War and to Abraham Lincoln. I believe Lincoln is remembered and written about not only because he guided us through the Civil War and preserved the Union but also because of his Emancipation Proclamation and the eventual abolition of Slavery. In addition to these prodigious accomplishments, the largely self-taught frontiersman was undoubtedly on the most eloquent presidents our country has ever had. His thoughtful words (both inaugural addresses and of course the Gettysburg address) spoke to the people of his time and continue to inspire us today.

Michael, out of all of Lincoln’s accomplishments as President what do you thing was his greatest?

I would have to concur with most people that it’s the Emancipation Proclamation. It makes it much greater knowing how he arrived at the decision to do it. Most people think the Civil War was fought strictly over slavery, but in the beginning, Lincoln’s primary concern was preserving the Union. Only after finally getting an upper hand over the South in the field and deliberation with his cabinet and advisers, who often vehemently disagreed with him, did he decide to take such a dramatic step. Every decision Lincoln made was made very carefully, and he made sure such an impactful one was done at the right time and would be most effective. 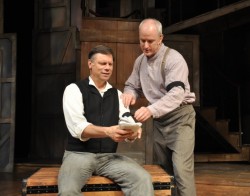 Stephen F. Schmidt and Michael Bunce in the Ford’s Theatre production of 'One Destiny.' Photo by Gary Erskine.

Have either of you read Our American Cousin? If so do you think it would work onstage today?

Michael: I did read it when we first started rehearsing One Destiny since we do perform quite a bit of it in the show. But I also happened to catch a reading of it a few months ago. I think the play would really only work today as a nostalgia piece.

It’s a very simple comedy of manners concerning the way the English and the Americans viewed each other: snobby aristocrats and bad-mannered rubes, respectively. I found myself rolling my eyes or groaning (quietly, I hope) when the intended reaction was laughter, and I got the impression the rest of the audience felt likewise.

Stephen: To be honest, I have only read the sections of American Cousin that we quote in One Destiny. But in my humble opinion, I don’t think it would really translate well for today’s audiences. It is a comedy of manners about a very specific time in the relationship between Great Britain and the U.S. and like many comedies it wouldn’t travel well through time.

If either of you were onstage at Ford’s Theatre the night Lincoln was shot what do you think your reaction would have been?

Michael: I think we can probably go back to One Destiny for a response. The play was written from the point of view of people that weren’t major players in the assassination event but were connected to it somehow (by being in theatre/onstage) and how they were affected. Was it their fault? Were they responsible somehow along the way for letting it happen? Could they have done anything to stop it? I undoubtedly would have felt that same guilt.

Stephen: Speaking of time travel… Interesting question. In One Destiny we talk about various reactions by various witnesses to this tragic event and they range from Harry Hawk’s running off stage to get away from Booth to John Miles’ reaction of trying to follow Booth and capture him. But I think that the assassination was so unexpected and so cleverly timed by Booth to coincide with a biggest laugh of the show that the main reaction would be confusion as to what had just happened. I would like to think that I would have tried to stop Booth but fortunately we will never know for sure.

When people come to Ford’s Theatre to see One Destiny, what do you want the audience to take away with them after seeing it?

Stephen: I hope that our audiences get an idea of what it felt like to be there that night and that they realize that history is what happens to human beings just like themselves. I also hope that they have questions about the events depicted in One Destiny and that those questions inspire them to begin their own research on the subject. But mostly I hope that they try to learn more about Abraham Lincoln and his life before April 14, 1865. For that is the study of a lifetime.

Michael: I hope audiences take a little bit of history with them. That they better understand how a momentous event like the assassination can have a profound effect on so many. And hopefully, the fact that they’ve just experienced a live theatrical event in the actual theatre where the events took place– that little bit of history will seem much more real.