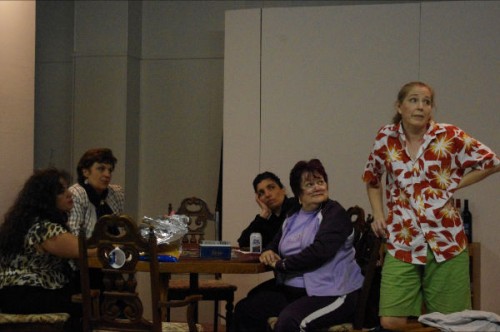 The popularity of the play then led to a successful film adaptation and television series. 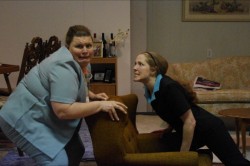 In 1985, after having received many requests from director’s wanting to cast females in the roles, Mr. Simon decided to adapt his own script, writing The Female Odd Couple, with Oscar now being Olive and Felix now being Florence.

The female version isn’t just females being cast in the roles.  Mr. Simon took time and care into developing roles where women act like women.

Instead of men sitting around a table playing poker, the female version has Olive (Jeanne Louise) sitting around a table playing Trivial Pursuit with her friends from all walks of life.  This includes a tough and proud cop, named Mickey (Philomena Gorenflo), an excitable and gossipy Latina, named Renee (Vivian Petersen),  simple-minded Vera (Merle Blair), and snarky Sylvie (Eva Miller).

Order meets disorder when Florence (Angela Sunstone) shows up at Olive’s messy apartment during a round of Trivial Pursuit looking for a place to stay after being thrown out of the house by her husband who had enough of her neat freak, neurotic ways.

After finding out that Florence downed a whole bottle of pills, Mickey exclaimed, “A whole bottle of pills! My God, get an ambulance!”  Olive believe’s there is probably nothing to worry about since she could have taken vitamins.  In which case, she says, “she could be the healthiest person in the room!” 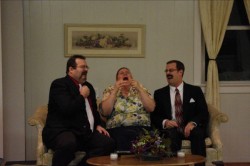 Upon moving in with Olive, Florence takes over the household, turning the nest of trash into a nest of cleanliness and order.  Olive forces her personality upon Florence too as when  she arranges a dinner with Manolo Costazuela (Keith Mervine) and Jesus Costazuela (Michael Padgett). Reminding me of characters that would be on Saturday Night Live, these brothers from Barcelona, Spain try to charm both ladies into an evening of romance, but Florence has other ideas.

Theatre veteran, Sid Curl is a master of directing comedy.  Nothing was left to chance in regards to him working with each of the lead actors to help develop their characterization. Every nuance of their characters were explored.  Comedic pauses, vocal inflections, and even sighs were planned in detail, leaving the actors a military precision-like delivery to their comedic performances.

Of course, none of this would have been possible if the actors weren’t as talented as they were.  Jeanne Louise (Olive) plays off of Angela Sunstone (Florence) extremely well, both delivering terrific performances. With their outrages laughs and sighs, Keith Mervine (Manolo) and Michael Padgett (Jesus) have some of the most memorable and funny moments of the evening.

While there was good comedic timing throughout the play, long set changes took away from the pacing of the show.  Still, this growing theatre company has made significant improvements to their lighting and sound, and talks have begun in hopes of moving to a more theatre-friendly facility.