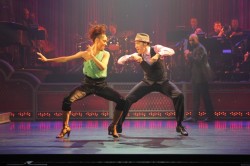 ‘Come Fly Away’ is an enjoyable evening of talented dancers moving and swaying to Frank Sinatra standards, complete with a live 15 piece band playing to Sinatra’s vocals.

It is helmed by world renowned choreographer Twyla Tharp.  Tharp isn’t as successful with telling a good story in a theatrical setting as she is with her modern dance pieces. This flimsy story about one night in a nightclub involving four couples does not service the music well and is not a particularly inspired concept.

The evening is chock a block of Frank Sinatra’s smooth vocal stylings. The choice of music ranges from the sultry “Witchcraft” to “My Way” and ending with what else, “New York, New York.”

Sinatra’s vocals are backed by a swingin 15 piece big band under the direction of Rob Cookman. The band is playing the original arrangements that Sinatra sang to on his recordings. Some of the greatest arrangers are represented including, Nelson Riddle, Don Costa, Billy May and Gordon Jenkins.  Soloists P.J. Perry on Saxophone and Mike Herriott on Trumpet are featured throughout the evening and add so much to the arrangements with their stylings. 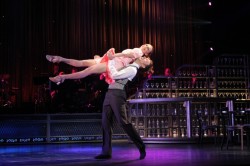 Mallauri Esquibel and Ron Todorowski in COME FLY AWAY. Photo by Joan Marcus.

Two dancers really popped for me during the evening; Meredith Miles as Babe and Stephen Hanna as Sid. In the numbers “Teach Me Tonight” and “Body and Soul” these two dancers exhibited great chemistry similar to what Astaire and Rodgers use to have in their movies. With Miles’ striking features and Hanna’s youthful and smooth energy, these snappy dancers are a winning combination.

The rest of the ensemble does give off a lot of energy in numbers like “Luck be a Lady,” “Lean Baby” and “Take Five.”

James Youmans setting of a nightclub is superbly lit by Donald Holder. Both men have created the atmosphere to serve the music very nicely and Holder’s use of color is quite striking.

With it’s swinging band and talented dancers, Come Fly Away has a lot to like, but Tharp’s unclear storyline might cloud some of your enjoyment.

Running time: 80 minutes with no intermission