Theatre Review: ‘Crown of Shadows: the wake of odysseus’ at Round House Theatre 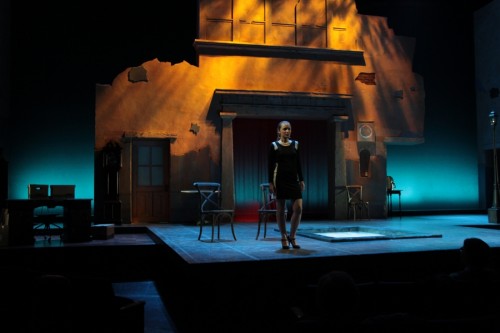 Julia Proctor (as Calliope) in Round House Theatre’s production of 'Crown of Shadows: the wake of odysseus.' Photo by Danisha Crosby.

Round  House Theatre’s Producing Artistic Director Blake Robison is leaving at the end of this season. For his last directorial effort at Round House he has scored big with a modern take on Homer’s Odyssey called, Crown of Shadows: the wake of odysseus, written by a very talented young writer named Jason Gray Platt. 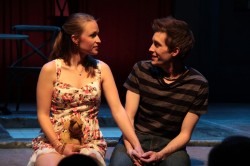 Julia Proctor (as Calliope) and Michael Morrow Hammack (as Telemachus) in Round House Theatre’s production of 'Crown of Shadows: the wake of odysseus.' Photo by Danisha Crosby.

Penelope (Deborah Hazlett) and her teenage son Telemachus (Michael Morrow Hammack) struggle to maintain control on Ithaca while waiting for Odysseus to return. As Penelope navigates the political waters of countless suitors, Telemachus, in his turbulent youth, chafes against both the bombardment of potential usurpers (Jefferson A. Russell) and his father’s legacy while also falling for a classmate, named Calliope (Julia Proctor). With pressure for a successor mounting, they battle two outsiders for control over the island.

Under Robison’s fine direction the cast brings Platt’s very well-written play to life. Hazlett gives a strong performance as Penelope and her scenes with Hammack show great chemistry. It would be very easy for the mother/son scenes to get maudlin and over dramatic. There is nothing schmaltzy about their performances. Hammack shows us that teens have not changed in hundreds of years. His character is still rebellious and stubborn as kids are today. Hammack’s performance is one to remember. As Calliope, Julia Proctor’s performance is irresistible. Her school girl beginnings mature as the night progresses to a very mature girl by the end of the show.

As everyone else, including the suitors and Telemachus’s swim coach, Jefferson A. Russell makes all of the characters unique and different. 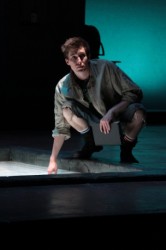 Michael Morrow Hammack (as Telemachus) in Round House Theatre’s production of 'Crown of Shadows: the wake of odysseus.' Photo by Danisha Crosby.

Production elements are quite wonderful. Scenic Designer Misha Kafman’s set includes a small swimming pool and a window that opens out onto a balcony for Penelope’s press conference. I also liked the detailing in Odysseus’s office. The set also makes good use of Round House’s space and is designed in such a way that there aren’t any obstructions for audience members.

Bill Clarke’s costumes and Kenton Yeager’s lighting respectively serve the production well and create the right atmosphere for Platt’s script. Kudos to Matthew M. Nielson on another fine sound design job. His musical compositions are wonderful as always and the use of thunder to give the idea that Odysseus even when he is away is present is a wonderful touch.

Crown of Shadows: the wake of odysseus at Round House Theatre is a must see for people who are interested in Greek mythology and for those who like seeing new playwrights work.  I hope Platt is not a one hit wonder because if this play is any indication of his capability as a playwright he has a very promising career ahead of him. When you add in the great cast and Robison’s tight direction gives Greek Mythology a good kick. I wish Robison all the best in his new job in Cincinnati and thank him for the wonderful work he did for the DC area while at Round House Theatre.

Running time: One hour 55 minutes with one intermission.