Theatre Review: ‘Next to Normal’ at Red Branch Theatre Company 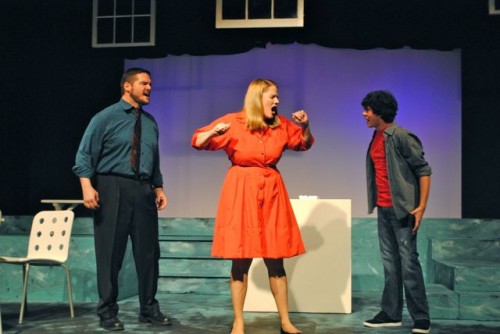 Winner of the 2010 Pulitzer Prize for being “a powerful rock musical that grapples with mental illness in a suburban family and expands the scope of subject matter for musicals,” Next to Normal is currently being courageously produced by the Red Branch Theatre Company in Columbia, MD.

Only 7 other musicals in history have received a Pulitzer Prize, including George and Ira Gershwin’s Of Thee I Sing (1932), Rodgers and Hammerstein’s South Pacific (1950), Bock & Harnick’s Fiorello! (1960), Frank Loesser’s How to Succeed in Business Without Really Trying (1962), Marvin Hamlisch, Ed Kleban, James Kirkwood, and Nicholas Dante’s A Chorus Line (1976), Stephen Sondheim’s and James Lapine’s Sunday in the Park with George (1985), Jonathan Larson’s Rent (1996). 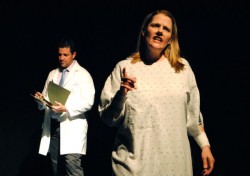 Next to Normal is about a mother, named Diana (Wendy Barid) who is battling bipolar disorder and the effect it is having on her husband, Dan (Dean Allen Davis), daughter, Natalie (Jennifer W. Culotta), and her son, Gabe (Brady Stevens).

Besides the topic of bipolar disorder, this ground-breaking rock musical also covers drug abuse, suicide, grieving a loss, and ethics in modern psychiatry. With so much pain to express, it seems that rock music is a good medium to talk about these issues.  The book and lyrics by Brian Yorkey and music by Tom Kitt is, as you can imagine, very depressing, yet uplifting at times, and even inspirational.

The spirited live band, features Will Lewis III serving as the conductor and pianist, Dustin Merrell on the violin and synthesizer, Jason Barteck on the guitar, Gordon Green on the bass, and Chris Marino and Allen Bernard Branch on the drums.  The dark, rich tones of Mr. Merrell on the violin is particularly powerful, while the drums show how the heart of life keeps beating even under the most grim of circumstances.

Multi-level platforms serve as the set, designed by Don Gibbin.  The primary color of the set seems to be a surgical green, perhaps to give audiences a sick feeling as if they are in a hospital or to remind them of how sick the family is in the household.

I can see how lighting designer, Karen Scudder wanted the stage to be dark, with unhappy colors.  The lighting, unfortunately, was so dark and uneven that I had issues with being able to see the actors throughout the play.

It was an interesting choice to have the actors perform without microphones.  While I had no trouble hearing anyone, I feel that adding reverb and other effects would have enhanced the rock style of music.

The cast did a nice job, considering the level of difficulty of the material. 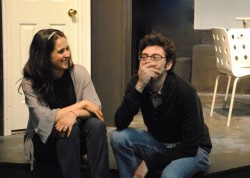 Brady Stevens as Gabe is one of the strongest members of the cast vocally, singing an exuberant rendition of “I’m Alive,” while Noah Mitchel is quirky and lovable as Henry, serving as one of the strongest actors on the stage.  He also works well with his girlfriend, Natalie, carefully played by Jennifer W. Culotta.

Dean Allen Davis as Dan perhaps tries a bit too hard with both his acting and singing.  The character should be one that tries very hard to help his wife, but if he could have reduced his effort by just a little bit, the performance would have come across more authentic.

The most challenging acting role is Diana.  Played by Wendy Baird, she is able to portray someone who is distant, yet close to her emotions.  Vocally, I would have liked her, as well as the other performers to put more soul into their songs.  Also, emotional highs and lows did not contrast enough, leaving the songs not as powerful as they could have been.

Next to Normal would have been next to impossible to produce if it wasn’t for Director Stephanie Lynn Williams’ steady hand in this uneasy musical. She and her cast should be commended for their courageous efforts and for being the first theatre in the area to produce this ground-breaking rock musical.