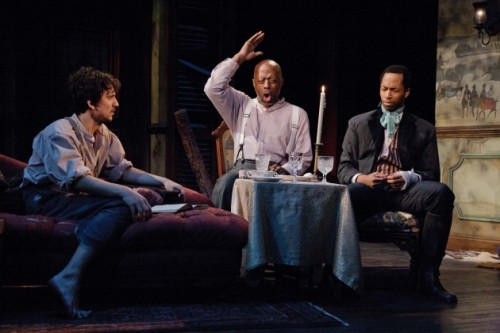 Theater J continues to educate and enthrall its audiences with a first rate production of Matthew Lopez’s play, The Whipping Man. With three stellar actors and a great physical production we are bought back to 1865 Richmond, Virginia where two newly-freed slaves (David Emerson Toney and Mark Hairston) and the son of their former master (Alexander Strain)—a Jewish Confederate soldier who has retreated to the burnt remains of his home—inhabit the disordered aftermath of the just-concluded War between the States. As the three men celebrate a most unconventional Passover Seder, they uncover a snarl of secrets and examine what it really means to be free. 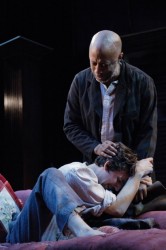 Alexander Strain as Caleb gives a powerful and physically draining performance. This role is extremely hard for any actor to play because Caleb’s leg is amputated at the end of the first scene. Because of this the actor has to hide the one leg for the rest of the show. Strain’s acting is a study in greatness.

As Simon, David Emerson Toney with a rich deep voice is equally as powerful. The moment where he finds out his family has been sold is quite stirring and Toney’s singing of spirituals show what the character has and is going through.

Mark Hairston as John brings the lighter moments in the play. John always manages to, shall we say, “creatively acquire” whatever is needed (china, eggs, etc). The chemistry between the three actors is something to behold. The Passover Seder scene shows off the trio to their fullest and proves again that there is so much talent in the DC acting pool.

Director Jennifer L. Nelson never over directs the piece, balancing between the quieter and bigger moments nicely. She knows the high caliber of her actors and lets them play the material honestly. 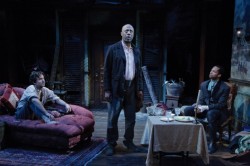 Physical elements help to enhance the enjoyment of this piece. Dan Conway’s set depicting a war torn house creates the perfect background for this play. Likewise for Ivania Stack’s costumes which capture the period nicely.

It is interesting to note that while Theater J is presenting The Whipping Man here in DC, Centerstage in Baltimore is also doing this play.

The performances of the three actors are heart stopping and Nelson’s staging makes The Whipping Man at Theater J a production not to be missed. When you go to a Theater J production you will always get something out of what you have just seen. That is what good theatre is all about.

The Whipping Man plays through May 20, 2012 at Theater J’s Aaron and Cecile Goldman Theater at the DC Jewish Community Center, 1529 Sixteenth Street, NW, in Washington, DC. For tickets, purchase them online.