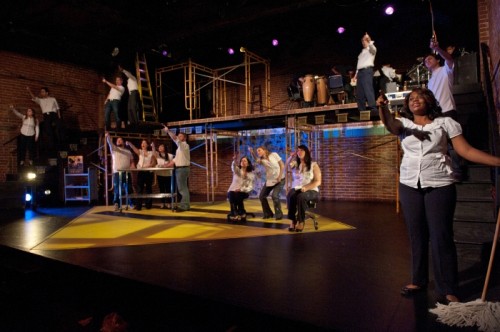 The cast of 'Working' at Keegan Theatre. Photo by Jim Coates.

It is always nice to see a production of a lesser known musical here in DC, particularly when two of its composers are Stephen Schwartz and James Taylor. The musical Working, currently playing at The Keegan Theatre premiered on Broadway in 1978 and unfortunately only ran for 12 previews and 24 performances. I often wonder why. Maybe people did not want to work all day at their jobs and then go to a show where people talk about their jobs all evening, but I digress. Since 1978 a lot has changed, so in 2011 a new production in Chicago with some new material premiered. Keegan’s production reflects those changes.

Working is based on the book of the same name by Studs Terkel. Terkel went around the country and conducted interviews with people in all kinds of occupations. Stephen Schwartz, Nina Faso and Gordon Greenberg took Terkel’s material and fashioned the interviews into a musical review of the human spirit. Every level of employment is represented in the show. From the delivery boy all the way up to big business, every class of people gets a fair shake in this show.

The show has always had a great score and this production allows the songs to really shine. It took seven writers to provide the score and in no particular order: Craig Carnelia, Micki Grant, Lin Manuel Miranda, Stephen Schwartz, Mary Rodgers, Susan Birkenhead and James Taylor (yes that James Taylor) have captured the voices of the characters in song to a tee. 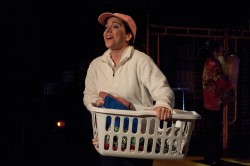 A few highlights include, Carnelia’s “Just A Housewife” which is brilliantly sung by Tina Ghandchilar. This song has been recorded by the likes of Karen Mason and Maureen Silliman (Carnelia’s ex), but I can honestly say there is no better interpreter of this song than Ghandchilar. This young lady commands the stage and does exactly what the material calls for.

Stephen Schwartz’s “Fathers and Sons” gets the first class vocal treatment from Mike Kozemchak and Carnelia’s “The Mason” is sung equally as well by John Loughney.

Miranda’s two new songs are a welcome addition to the score. “Delivery Boy” is performed with great energy by Manuel Ayala Sapelli. On the more touching side,  the song, “A Very Good Day,” shows the contrast of a nursing home employee and a mom out for a day with her child, performed honestly and vocally solid by RaMond Thomas and the always wonderful Priscilla Cuellar.  Cuellar also has a nice solo turn in Micki Grant’s anthem, “If I Could’ve Been.” You know how it is when you go to the theatre and are just hit by someone’s presence; well that is how it is when Cuellar is on stage. At the risk of going over the top….Oh, what the heck. Cuellar is a force of nature onstage!

With the score it is interesting to note that James Taylor recorded his two songs, “Millworker” and “Brother Trucker” on his 1979 album Flag, so a year after the show closed two of its songs were being heard by the masses. I love it when that happens. 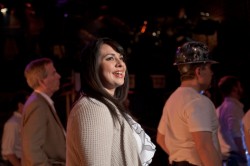 Director Shirley Serotsky has done a fine job of weaving the monologues and songs together and the transitions are very smooth. It did strike me however that some of the performers were pushing the pace of their respective speeches. Weather that was a choice by the actor or the director, it does not serve the material because if you speed through one of these monologues you begin to not care about the character. I want to stress that the intent and character choices are all good it just felt a little rushed in spots (at least to me).

Musical Director Jake Null leads a very hip 5 piece band consisting of two guitars (Benjamin Young and Bradley Foster Smith), Bass (David Burrelli), Drums (Alex Aucoin) and Null on Keyboard. These five guys know how to rock and when to lay back and just back the singer. I do question Null’s choice of tempo in the song called “Joe” which is about a retired fireman and what he does since he left the job. The song for the most part is a 4 note vamp all the way through and is supposed to be very laid back as if the music is the pace of an older person walking very leisurely.  The choice here is to push the tempo. In doing so, the song becomes more of a jog than a leisurely walk.

Production elements are very nice. Leon Wiebers industrial set consisting of scaffolding and platforms are expertly lit by Stephanie Freed. Both designers make very good use of the space and the concept is not so clunky that it gets in the way of the performers.

I do recommend you see Working at The Keegan Theatre for a number of reasons. The show has a wonderful score and two knockout performances by Ghandchilar and Cuellar. If the cast settles down with the pacing and trusts what Serotsky has given them, this could be a very good representation of a very underappreciated work of the musical theatre.