‘A Quick 5’ with Bill Russell 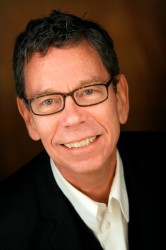 Bill Russell is the lyricist and book writer for the musicals Side Show, Elegies For Angels, Punks and Raging Queens (also Director), Lucky Duck, Pageant and the upcoming The Last Smoker in America. His collaborators include Henry Krieger, Janet Hood, Albert Evans and Frank Kelly. After having seen Side Show on Broadway I could not fathom how this show did not run way longer than it did and how the show was beaten out for a Tony Award that year by The Lion King. Side Show was a musical about Siamese twins and I think it was the only time in history that the two woman playing the twins (Alice Ripley and Emily Skinner) were nominated as one for Best Actress.  I admire Bill’s work as a librettist and as a director. The cast recordings of Side Show and Elegies for Angels Punks and Raging Queens are still available and I highly urge you to add them to your collection. You will hear the work of a very talented man.

Did you know you were going to become a writer for the theatre when you were growing up?

I grew up in the Black Hills of South Dakota, not exactly a hotbed of theatrical activity. My grandparents were cattle ranchers and everyone knew my father as “Cowboy.” But somehow, in spite of that context, I was bitten by a theater bug at quite an early age. I distinctly remember in 5th or 6th grade the teacher going around the room and asking us what we wanted to be when we grew up. I said, “a playwright” and the girl sitting behind me said, “What’s that?” 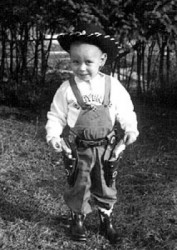 Bill Russell circa 1952. Born in Deadwood, South Dakota. Raised in Spearfish, South Dakota with a family ranch across the border in Alladin, Wyoming.

Two of your musicals Pageant and Elegies for Angels, Punks and Raging Queens were orchestrated by the late great James Raitt. What do you remember most about your collaboration with him on these two shows?

The opening night of Elegies for Angels, Punks and Raging Queens at the Criterion in London’s West End, I wanted to remind the cast why we were doing the show. We sat in a circle on the stage and talked about AIDS. James, who had been around for the last couple of weeks and whom everyone adored, “came out” by admitting that he was HIV positive. He also talked about his lover, who had died just when Pageant was opening off-Broadway. It was a devastating and moving moment for that cast. I was so grateful to him for it. And especially for his incredible orchestrations for both shows, which are so different from each other.

Your musical Side Show had an undeserved short run on Broadway originally. Do you think that if marketed differently that the outcome would have been different?

That’s the million dollar question! A lot of people blame the marketing but I tend to think it was only one of the elements that contributed to the “undeserved short run.” The show was an unknown property with no stars (though they are now). A lot of people have an inherent and strong aversion to just the idea of conjoined twins. The c.d., which I think changed a lot of people’s perceptions about what the show was, wasn’t released until a month before it closed. And it was a particularly heavy season for musicals — including Lion King and Ragtime, which both had producers with very deep pockets. There’s an exciting future ahead for the show, but I’m not at liberty to discuss it yet.

Can you please tell us about your latest show called The Last Smoker in America?

I am so psyched! It’s an original musical I wrote with composer Peter Melnick. It will start previews off-Broadway at the Westside Theatre July 11th, directed by Andy Sandberg. We have a killer cast! And production team. We’ve been working on it, off and on, for eight years now, and it really feels like we’re ready to go. It’s a four-hander, set in the near future when anti-smoking laws include jail time.

Which parts of working on a musical do you like the most- book writer, lyricist or director?

I like writing lyrics the most. It’s relatively easy for me. And they’re finite. You don’t have to spend years on a lyric, like you do with a book. Writing musical books is so challenging, but few things are more satisfying than when you feel one is finally working. And I love directing, though I find it consuming and exhausting. I could never jump from one directing project to another, like some of my friends do.