‘A Quick 5’ with Cliff Eberhardt 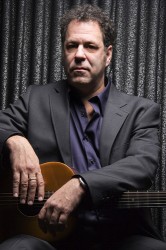 Cliff Eberhardt is currently making his theatrical debut as The Blind Baladeer in The Taming of The Shrew at Folger Theatre for which he composed and performs the original music. His songs have been recorded by Ritchie Havens, Shawn Colvin, Russ Taff and Buffy Sainte Marie. You might have heard his voice on commercials for products like Coke, Miller Beer and Chevrolet (“The Heartbeat of America” campaign). He has recorded eight solo cds all of which can be obtained through his website. I urge you to see Cliff in The Taming of The Shrew at Folger Theatre. His songs are a welcome addition to the production. If you like what you hear you can purchase his cd of songs from the show called Shrew Songs.

Yes. Music has always been a large part of my life. My father played guitar and my mother played piano. I took up the uke at age 4, guitar and piano at age 6, and started performing live with my two brothers at age 7. That’s when I told my parents I wanted to be a professional musician. Soon after that, my father gave me a toy dentist kit!

What was your first professional job as a musician?

It was singing with my older brother Geoff. I was 16, and the gig was in a coffee house on the campus of Dennison University in Granville, Ohio. 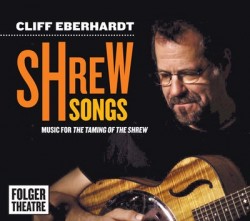 The Taming of The Shrew is your first foray into composing for a theatrical piece. Is it harder to score for the theatre than say writing a commercial jingle or a pop song?

YES! You have to read the script and know it well enough to not only find places for songs, but also find lyrics that fit the moment.

How did you go about deciding which moments in the play were going to be musicalized?

I discussed them with Aaron Posner, the director, but most were obvious to me. I chose moments that stood out to me emotionally (“Some Call Love”) or philosophically (“Oh Lord What Fools These Mortals May be”).

After The Taming of The Shrew where can we see you in action?

You can go to cliffeberhardt.net and click on “tour” to see all my upcoming live performance dates.

The Taming of The Shrew plays through June 10, 2012 at Folger Theatre, at The Folger Shakespeare Library which is located at 201 East Capitol Street, SE, in Washington, DC. For tickets, call 202-544-7077, or order them online.