Joe Brack is currently in rehearsals for The Illuision which opens at Forum Theatre on May 24th. Some recent area credits include Astro Boy and The God of Comics at The Studio Theatre, After The Fall at Theater J, bobrauschenbergamerica at Forum Theatre, Mary Stuart for WSC Avant Bard, Lyle The Crocodile for Imagination Stage and The Ramanaya for Constellation Theatre Company. Over the past few years with City Artistic Partnerships he has been giving DC a tour de force holiday performance as Crumpet the Elf in The Santaland Diaries which offers a nice alternative to the standard holiday fare. He is newly married to DC actress Tonya Beckman Ross which makes him an extremely lucky man besides being a very talented one. As you will see there are plenty of opportunities for you to catch Joe in future productions. Please do so as you will thoroughly enjoy yourself.

It’s tough to define “professional” because I guess that it implies the job is a paying gig, and if that is the main criteria, mine was at Carey Dinner Theatre in Hattiesburg, MS. I went to college there at old William Carey College, now William Carey University. Every summer they do two musicals, where the performers wait on the tables and then perform in the shows. I was Dracula in Dracula: The Musical?. Imagine Dracula slinging sweet tea! What I consider my first “real” job was playing the character “A” in Sarah Kane’s Crave at the Edinburgh Fringe Festival. It was produced by Failbetter Productions and directed by Jonathan Heron. I learned a lot about myself as a performer during my time abroad. It was a very difficult and emotional time, but overall one of the most artistically satisfying experiences of my life, so far. 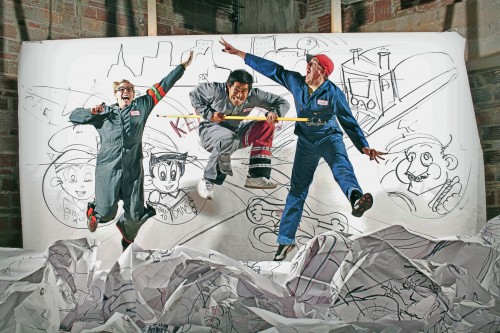 Jamie Gahlon, JB Tadena, and Joe Brack in 'Astro Boy and the God of Comics.' Photo by Scott Suchman.

You recently completed a run of Astro Boy and the God of Comics at The Studio Theatre. How hard was it to get down the drawing style of Osamu Tezuka?

It wasn’t terribly difficult, but I think that’s because I was cast because I have a visual arts background. I started in art well before I discovered theatre, and started in theatre as a costume designer before I went into acting. For Astro Boy, the cast trained to draw with Natsu Onoda Power and her artistic collaborator Alex Thomas. The cast had one week, before rehearsals began, dedicated to what we called a “drawing boot camp.” We trained in quick drawing and worked with Natsu and Alex to create a look for the show. It was outstanding. The cast was really fantastic for that show and I miss them. Natsu is an inspirational leader and a visionary. I would love to work with her again in the future.

Can you please tell us a little bit about your current project at Forum Theatre called The Illusion?

The first thing I tell everyone about this piece is that the cast is phenomenal. Truly fearless and dedicated bunch of creative actors. You really have to listen in this piece. It’s got beautiful language, which can be hazardous. Beauty can mask many devious things. I think, it’s a play about performance. How we perform for each other and portray roles in other people’s lives, the role of the father, the son, the teacher, the student, the lover, the rival, etc. The way we play these roles and how we achieve our goals without letting the mask slip, or removing the mask completely to get what we want. We question reality in this play. Not only the reality these characters exist in, but the reality of the audience as well. What is real? What is illusion? It’s got magic and maids, singers and swordsman, there’s a little something for everyone. 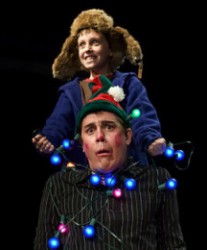 For the past few years you have been presenting a tour de force solo performance of The Santaland Diaries. What first drew you to this project?

My very good friend, Rachel Klem, opened a little black box theater in Durham, North Carolina called Common Ground Theatre, which I am proud to say is still up, running, and doing very well. Rachel and I were in an improv troupe together called The Transactors, and one night after rehearsal we were out for drinks and Rachel asked if I knew the work of David Sedaris. I said, “I never heard of him.” She gave me a copy of The Santaland Diaries and said she thought it would be a great piece for me. She offered to produce and direct it, if I was willing to do it, I said yes. Our first production was at Common Ground in 2005. I’ve done it every year since, with the exception of 2010. I perform it here in DC with City Artistic Partnerships under the direction of another dear friend, Mr. Matty Griffiths.

After The Illusion what are your next few projects?

This summer at the Warehouse Elevator Room, City Artistic Partnerships and I are premiering a new piece, My Princess Bride; a One-Man Take on S. Morganstern’s Classic Tale of True Love and High Adventure. I am so excited and slightly terrified to do it. It’s a massive undertaking. The source material is very well known, so I’m certain there will be a lot of expectations, which is daunting. I’ve been working on putting this piece together for almost a decade. Hopefully we’ll do Morganstern proud. Then this Fall I am working on The Mostly True Adventures of Homer P. Figg, directed by Gregg Henry. The cast for Homer is all-star. It is part of the Kennedy Center’s T.Y.A.. After reading the script, the show will delight adults as well as children. And finally, next Spring I will be performing in the Roald Dahl rep at Imagination Stage. We’re doing the premiere of , The Magic Finger in rep with the classic, James and the Giant Peach. There’s so much wonderful theatre in this area, people need to get out there and see some shows!