‘A Quick 5’ with Julianne Brienza 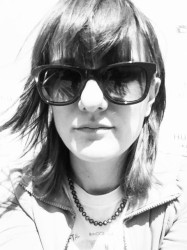 Julianne Brienza is the Executive Director of the Capital Fringe Festival which is going into it’s seventh year this summer. Capital Fringe Festival is the only major unjuried, self-producing, open-access Festival in the Washington, DC area and occurs in July each year. The Fringe Festival provides all artists, whether new or established, a venue to express and develop their talents and artistic visions in total freedom. Under Brienza’s direction, the festival continues to grow each year. I was fortunate enough to work 4 shows in Fringe last year and am working at least 2 in this year’s festival. I appreciate the organization that Brienza and her staff have in developing this event each year.  Girl from Montana makes good in DC. Happy 7th anniversary to Capital Fringe!

You are originally from Montana. What brought you east and eventually to DC?

Well, I went to college in Wisconsin. Lived in Chicago for a hot second. Spent nine months in Iowa working as a graphic designer at a newspaper and playing campaign manager for a local politician running for the Iowa legislator. I woke up one day in Iowa and thought it might be good to use my BFA in Theatre. I applied for internships and apprenticeships all over… I got accepted to the Arden Professional Apprenticeship at the Arden Theatre in Philadelphia. So, I moved to Philly site unseen with the advice that I should always walk on the outside of the sidewalk in a city and carry $5 with at all times incase I needed to take a taxi.

Why did you feel DC needed its own Fringe Festival?

When I first arrived in Philly the Fringe Festival was happening. Part of my apprenticeship was that we had to volunteer for box office shifts and such. I just thought it was amazing. I met so many members of the theatre community at the Fringe Cabaret. When I moved to DC – I just assumed every major city must have a Fringe Festival. I was wrong. After, being aghast about it. I stumbled upon Damian Sinclair at Woolly whom I had known from Philly…and it just sprouted from there.

Where and how do you find the venues for the productions? 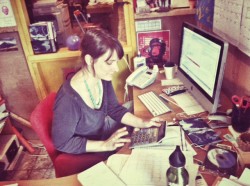 What is your criteria for picking which productions end up in Capital Fringe?

For the summer Fringe Festival, first come first served up to what we can accommodate in our venues. For fallFRINGE I choose the shows or artists from those that have participated in the summer fringe in the past.

Urinetown started at Fringe NYC before moving to Broadway. Are there any productions from Capital Fringe that have gone on to commercial success?

Well, Super Claudio Brothers by Drew Fornarola and Marshall Pailet from the summer Fringe Festival 2010 got picked up by Dreamworks Theatrical and is in development as a Broadway production. A lot of shows have gone on to have successful runs at other festivals or regional theatres. “Commercial success” is not really in the fabric of Fringe. Each month I interview an artist from our Fringe community – I always ask “what does success mean to you.” No one has ever replied with “ I want my show to be the next Urinetown.”