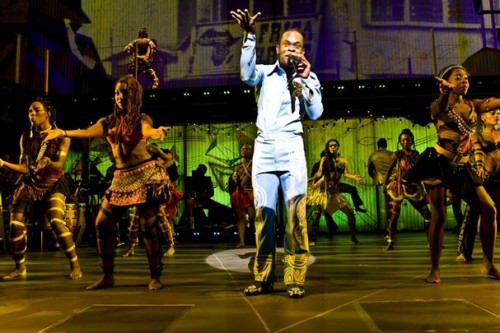 ‘Fela!’ now playing through May 20th at Morgan State University.

Upon entering the theatre at Morgan State University, you will be transported back in time to the 70’s where Fela Kuti, the godfather of Afrobeat welcomes you into his club, The Shrine in Lagos, Nigeria for his last concert.  The concert setting is appropriate because Fela! isn’t your typical Broadway book musical.  It is actually a cross between a concert and a musical.

The Tony Award-winning musical, Fela! was inspired by the biography about Fela Kuti by Carlos Moore.  But rather than telling the story with a lot of dialog, this musical is primarily told through Fela’s music, lyrics, and African dance.  This is why world-renowned performance artist, Bill T. Jones was the perfect choice to direct and choreograph Fela!.

The energy from the cast, music, and dancing was so invigorating, that I felt 20 years younger!

In my conversation with Stephen Hendel, (lead producer/co-conceived Fela!) he said that “this show is transformative. It is about standing up for human dignity. It’s about using your talent, your gift, your creativity and art to make a difference in the world….The problems that Fela was singing about in 1976-1977 are the same problems today.”

It is easy to see why Sahr Ngaujah was Tony-Nominated for his role as Fela Kuti.  Sahr embodies the spirit of Fela with his hypnotic singing, dancing, and saxophone playing.  He does this all while being the Master of Ceremonies of sorts for the show, even getting the audience up on their feet as if they too are dancing in his club.

Accompanying Sahr is a live, 10 piece band, conducted by Aaron Johnson.  In a time when many touring companies are taking short-cuts by utilizing computers to “digitally enhance” the orchestra, it is refreshing to have an all live band whose playing is so hot that it almost melts the instruments!

Speaking of instruments, Melanie Marshall as Fela’s mother, Funmilayo has a real gift for singing.  Trained at the Royal College of Music with the Foundation Scholarship for Singing and Piano, Melanie executed her vocal trills effortlessly to the astonishment of the audience during her song, “Rain.”

Tony-Nominated Sahr Ngaujah (Fela) and the cast of ‘Fela!’

The energy from the cast, music, and dancing was so invigorating, that I felt 20 years younger! Adding to the energy was Peter Nigrini’s Projection Design whose sometimes startling video images appeared on the set as well as on two screens.

“From Africa to America and America to Africa, we have a lot to learn from each other” is one of the few, but very effective lines spoken between characters in the play.  Mr. Hendel sums up that sentiment by saying “what we did (in this production) on a very high level, as it turns out, was we created a show that makes that cultural identification and that literally brings people in Africa and people in the United States and African Americans in the United States together, and that’s why this (show) is an exceptional thing.”

Below is Mark Beachy’s interview with Stephen Hendel. (The person who co-conceived and produced FELA!)