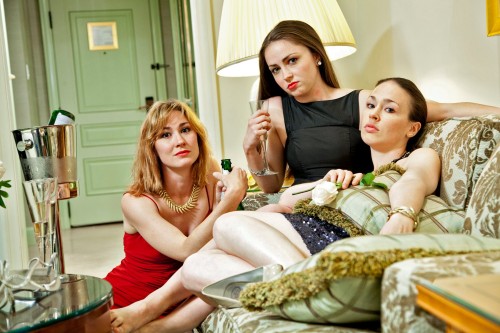 Playwright Leslye Headland has perfected the art of presenting insightful social commentary amidst witty and hilarious, yet oftentimes inappropriate, dialogue in Bachelorette, now playing at Studio Theatre.  A hit off-Broadway in 2010, this play chronicles what happens when four high school “friends,” now approaching age 30, reunite for a bachelorette party for a much-reviled classmate in a posh NYC hotel room.  Two of the girls aren’t exactly invited and neither are the two men (Jeff and Joe) who join in the festivities.  By the time the actual honoree arrives, the party has already become a fest of illicit and licit drug use and sex, and a time to reveal hidden secrets, plots of revenge, and feelings of unadulterated jealousy.  It’s hardly a picture-perfect night to remember for any of them. 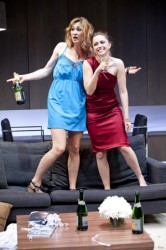 The party crashers and the one who allowed them to do it aren’t exactly what one would call successful in their post-high school life although they may have been the “queens of popularity” as teenagers.  Gena (Laura C. Harris) is a coke addict reeling over an abortion and a breakup with her boyfriend.  Katie (Jessica Love) is a former prom queen turned retail sales associate with a penchant for taking excessive pills, drugs, alcohol, and having sex with men she hardly knows.  The third, at first glance, seems to still have it all.  Regan (Dylan Moore) works with kids with cancer in a hospital and has been in a relationship with her boyfriend for three years.  Only she, too, is harboring deep secrets and inner doubts of her own self-worth.   Becky (Tracey Lynn Olivera) is the only one who seems to be getting things right with her impending nuptials to a successful man that adores her.  It’s quite a shift from high school when Becky was far from the “it” girl.

There are no weak leaks in this ensemble cast.  Collectively, all of the actors possess fierce comedic talent and timing, an ability to engage in realistic interpersonal relationships, and flawlessly execute scenes which essentially amount to emotional rollercoasters.  Laura C. Harris perfects the “messed up but sweet” character.  Jessica Love is sympathetic as “has-been” Katie.  In lesser hands, Katie could be played as a caricature, but Love brought a certain level of humanity and understanding to the role. Her revelations to Joe (a very charming JD Taylor) about her past comprise one of the most dramatically effective scenes in the play. Dylan Moore excels as the passive-aggressive girl with an “ice queen” exterior.  This is most evident in her scenes with cool and collected Eric Bryant (Joe).  Her final emotional breakdown upon Becky’s arrival is worth the price of admission alone.

Overall, Studio has a winner in this production.  It’s a fine example of a great script, and equally great acting coming together to create an exquisite whole.

Olivera, always a strong actress, brings a level of normalcy to the production with her portrayal of Becky.  Although she has far less screen time than the others, she makes effective use of the time she does have.  The audience immediately knows who Becky is, what she stands for, and what she wants in a matter of seconds.  If played by a less capable actress (one lacking Olivera’s confidence and assertiveness), Becky would likely come off as more of a victim, which would compromise one of the overall messages of the play. 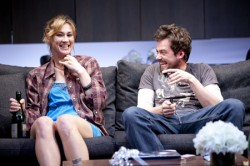 Studio’s creative team does a commendable job in bringing out the best in Headland’s script.  The script itself is very strong although it does take a bit of time for Headland to let the audience know what kind of show they’re in for- a dark comedy with a message, or a celebration of the slackers of the world devoid of any real meaning.  However, the script finds its way and eventually is most satisfying.

Studio Theatre’s Artistic Director David Muse brings out the best in his cast and ensures a realistic telling of the story rather than a campy one.  Debra Booth’s setting captures a 5 star, sterile NYC hotel room very nicely.  Jennifer Moeller’s costumes, likewise, provide insight into each of the characters.  Moore’s costume, for example, is very put together, which is how her character likes to be perceived.  Loves’s costume is less appropriate for a high-end affair and more appropriate for a night out at a club downtown, which is most fitting for her character.  Michael Lincoln’s lighting and Neil McFadden’s sound design are minimal yet effective and do not overshadow the overwhelmingly first-rate acting.

Overall, Studio has a winner in this production.  It’s a fine example of a great script, and equally great acting coming together to create an exquisite whole.  It’s certainly intense at moments, and may not be for those uncomfortable with crude dialogue, but should be considered a must-see for those who like to take a chance on something that offers great insight on American society, what we value, what we don’t, and what it means to be successful.