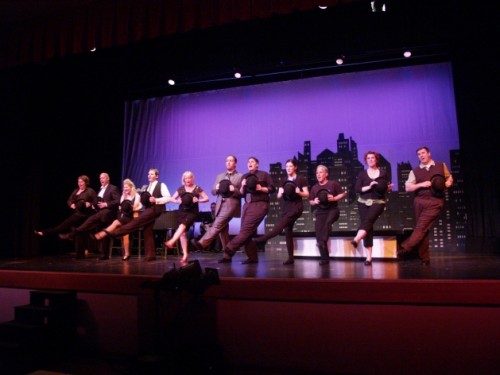 The cast of 'Company' at Silhouette Stages. Photo by Steve Teller.

Company, currently playing at Silhouette Stages (Slayton House Theatre), is not a musical that will appeal to everyone. The curtain rises to reveal a cityscape at twilight, a platform, and a grand piano. The set never changes, though the lighting alters effectively to show not only twilight but daylight and sunset. The orchestra consists of four musicians seated in darkness behind the piano. If you’re expecting a flashy, Webber-esque affair, you’ll be disappointed—it’s Stephen Sondheim’s first major solo effort, based on a series of 11 one-act plays about ten married couples and their single, thirty-five-year-old friend Robert. As far as true-to-life goes, however, this is probably the most realistic musical ever written.

The Silhouette Stages’ production is funny, heartbreaking, moving, and at times a little too close to reality—perfectly communicated, thanks to the consummate direction of Debbie Mobley and Connie Ross, and the musical direction of Michael Tan.

Company deals with the very real fear of being alone, and the insufferable existence of being surrounded by (presumably) happy couples. The couples, of course, are not all happy—one pair gets divorced specifically to be single, one pair constantly bickers, one thrice-married wife lives in the perpetual shadow of her self-doubt. The music is full of that rare Sondheim talent, simultaneously moving and funny and occasionally glorious. The choral orchestration, much of it between eleven or fourteen people at once, is exceptionally well-done, and it was a good move to ensure that the actors were miked.

The theme might grate on some people, but no one can fault the actors, who were consummate professionals. Ashley Gerhardt (Amy) in particular was riotously funny during her mile-a-minute rendition of “Getting Married Today,” and Danielle Sherry’s comedic timing was perfect for her role as the unapologetically ditzy flight attendant April. Lead Ryan Geiger’s singing voice is fantastic, especially belting out the notes to “Being Alive,” Company’s anthem for the single and yearning. If I had one issue, it was that the dialogue was not always presented realistically. In many musicals, dialogue is basically filler between numbers, but this originated as a series of one-acts, making the words just as crucial as the music. Some of the scenes came off as unnecessarily jovial and inauthentic.

There were no technical issues, and despite frequent scene changes, the blackouts were efficient and not remotely tedious. The actors need to do a little more work coordinating dance numbers and timing, but no one missed a line or a cue, and everyone was so invested in their roles that the various conversations resonated as authentic. That is 90% of what makes a show run smoothly.

I personally would have seen Company as a stage play—many musicals, by virtue of people randomly breaking out into song, have too much frivolity for such a serious topic—but Stephen Sondheim decided to write it as a musical. The Silhouette Stages’ production is funny, heartbreaking, moving, and at times a little too close to reality—perfectly communicated, thanks to the consummate direction of Debbie Mobley and Connie Ross, and the musical direction of Michael Tan.

Company plays through May 20, 2012 at Silhouette Stages at The Slayton House Theatre, located in the Wilde Lake Village Center, 10400 Fox Cross Lane, in Columbia, MD. For tickets, purchase them at the door or online.