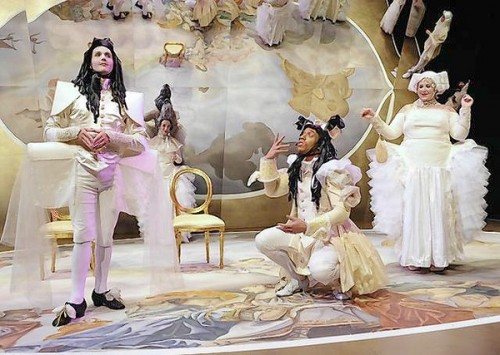 The Rep Stage, housed on the campus of Howard County Community College, just finished its run of Las Meninas by Lynn Nottage.  Ms. Nottage is the author of Ruin, which won a Pulitzer in 2009, and Arena Stage’s recent production won this year’s Helen Hayes Award for Best Play.

Las Meninas (Ladies in Waiting) is set in the court of King Louis XIV of France and his wife, Marie-Theresa.  I don’t know much of the story of the story is true, but the director’s notes indicate there really was a Black African dwarf given to the queen and she really did conceive a child by him.  Of course, the dwarf was beheaded for it, and the resulting daughter announced to have been stillborn and subsequently sent from the court.  Attempting to prove he does have a heart, Louis does not kill the infant, but gives her to a convent and demands – in exchange for a generous monthly “dowery” – that she never be allowed outside the convent walls or informed of her parentage. 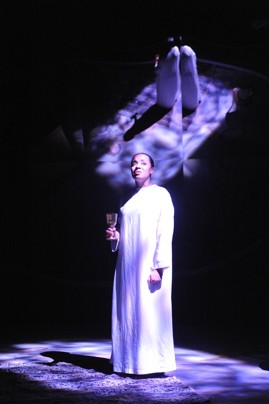 Hardly surprising is that Nabo does not like being “given” to anyone, even when he and the queen develop a close relationship.  He still yearns to be free, of course, and this creates a wonderful dynamic as we see that he and the queen are very much alike in that way.  There is a moving scene towards the end of Act II when we see quite clearly that the queen is no more free to leave her situation than he is.  Hers was a political marriage and is not only loveless, but humiliating.  But if she goes back to Spain, war breaks out.  It’s one thing to walk and away and bear the consequences, but when two entire countries bear the consequences?  Well, ya gotta think twice about that.  Others may have seen that dynamic develop before I did, it seems rather obvious when I think about it now.  But whatever, we clearly see why the two would bond so closely, even though both know they shouldn’t.

With some casting changes, the company at the Rep was the same one that just played at the Kennedy Center, and some other locations.

The script exists in a “heightened” reality.  That is, the playwright makes no attempt at realism, which can be excused to a point when you think of how stylized the court actually was.  The problem is, she doesn’t give the actors as much to work with as most scripts do: The characters border on caricatures.  That leaves the actors with the job of making them into real people,a difficult task, to say the least.  The cast rises to the challenge quite well, though.

Most impressive was Katie Hileman in the role of Marie-Theresa, who was also in the Kennedy Center production.  She does a superb job with this very difficult task.  Her Queen Marie-Theresa rises above the clown-like character she is written as to become a woman we really do care about, even if she does often behave very much like a spoiled brat.  While not dead-on 100% of the time, Ms. Hileman is there enough to be very impressive, all the more so because—ready for this—she’s a student.  An undergrad.  You go, girl!

Drew Kopas’ the King Louis starts out very one-dimensional, but he picks up steam as he goes.  To be fair, the script itself doesn’t start to pick up steam until a good way into Act I, so perhaps Mr. Kopas can be excused for that.  In any event, he got himself up to speed in Act II and was entirely believable.  Especially in Act II when he is telling the dwarf why he is going to have him executed.  That was a beautifully done scene, partly because Keilyn Durrel Jones, also a student actor, who played the dwarf, ended up giving us a very real character as well.  Like Mr. Kopas, he starts out monotone, but catches up quickly and makes Nabo Sensugali an intriguing character.  Mr. Jones is not a dwarf (I know that’s politically incorrect, but it’s true to the time of the play), but moves in a squat with a grace and agility that is quite surprising.  And I love that the director had him hold his legs out straight when he was sitting in a chair.  His own feet would reach the ground, of course, but a dwarf’s wouldn’t, so… 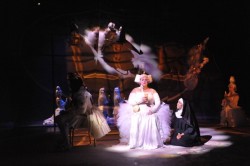 Susan Rome plays the dual role of the Queen Mother and the Mother Superior who takes in the bastard child and raises her in the church.  She does an amazing job with the Queen Mother, giving us a very fun, but still wise, woman.  Interestingly, she doesn’t come anywhere near matching it with the abbess.  I think the latter may have been more influenced by director Eve Muson than the former.  I say that because, as stylized and unconcerned with reality as the script is, with its insistence that productions follow suit—from monochrome costuming to curls that look like construction paper—it’s pretty easy to see where the direction succumb to temptation and might go over the top a little sometimes.

Another performance worth noting is Tony Tsendeas as the court painter and the doctor.  The painter is over in one corner, observing everything, but not talking much.  He just does his job, making royals look much better than they actually do.  He does have a wonderful conversation with Nabo, though, in Act II.  His performance is beautifully dry and understated.

The doctor isn’t on stage a lot, but there’s the scene where he announces to the court that the queen is, indeed, pregnant, and the king knows darned well it isn’t by him.  He asks the doctor if there is “another way to do it, besides, you know, the conventional one.”  (That is not an exact quote, but most of those words were in it and that is the idea.)  The doctor obligingly asks Louis if he has eaten off the same plate, touched her hand at a particular time, come into contact with her saliva, and whatever other nonsense he can come up.  Louis immediately grabs the bones the doctor throws him, and the two actors play it perfectly, so it’s a great scene.

I would be seriously lacking if I didn’t mention the set.  Or more specifically, the scrim/mirror.  Being a scrim, you can’t see beyond it unless the light hits it from the right direction, like the one-way mirror of an interrogation room.  But usually a scrim is invisible when it’s not transparent.  This one becomes a mirror!  I’ve never seen that before.  It’s terrific.

With the current popularity of Nottage, you will probably be seeing many more productions of the play.  I hope you enjoy them.